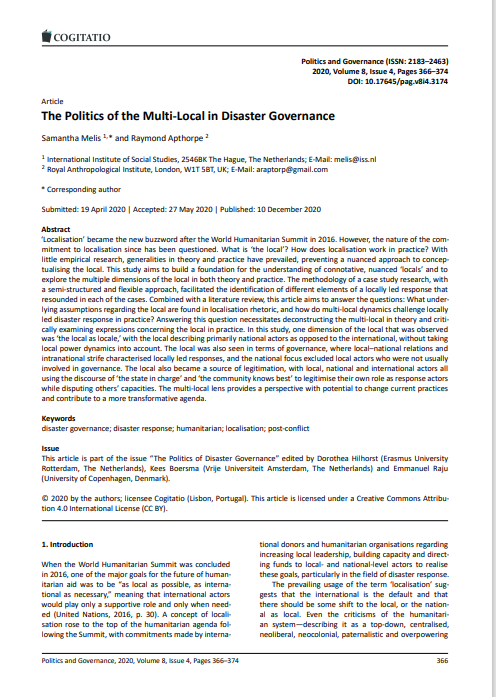 The Politics of the Multi-Local in Disaster Governance

‘Localisation’ became the new buzzword after the World Humanitarian Summit in 2016. However, the nature of the commitment to localisation since has been questioned. What is ‘the local’? How does localisation work in practice? With little empirical research, generalities in theory and practice have prevailed, preventing a nuanced approach to conceptualising the local. This study aims to build a foundation for the understanding of connotative, nuanced ‘locals’ and to explore the multiple dimensions of the local in both theory and practice. The methodology of a case study research, with a semi-structured and flexible approach, facilitated the identification of different elements of a locally led response that resounded in each of the cases. Combined with a literature review, this article aims to answer the questions: What underlying assumptions regarding the local are found in localisation rhetoric, and how do multi-local dynamics challenge locally-led disaster response in practice? Answering this question necessitates deconstructing the multi-local in theory and critically examining expressions concerning the local in practice. In this study, one dimension of the local that was observed was ‘the local as locale,’ with the local describing primarily national actors as opposed to the international, without taking local power dynamics into account. The local was also seen in terms of governance, where local–national relations and intranational strife characterised locally led responses, and the national focus excluded local actors who were not usually involved in governance. The local also became a source of legitimation, with local, national, and international actors all using the discourse of ‘the state in charge’ and ‘the community knows best’ to legitimise their own role as response actors while disputing others’ capacities. The multi-local lens provides a perspective with potential to change current practices and contribute to a more transformative agenda.

The Politics of the Multi-Local in Disaster Governance