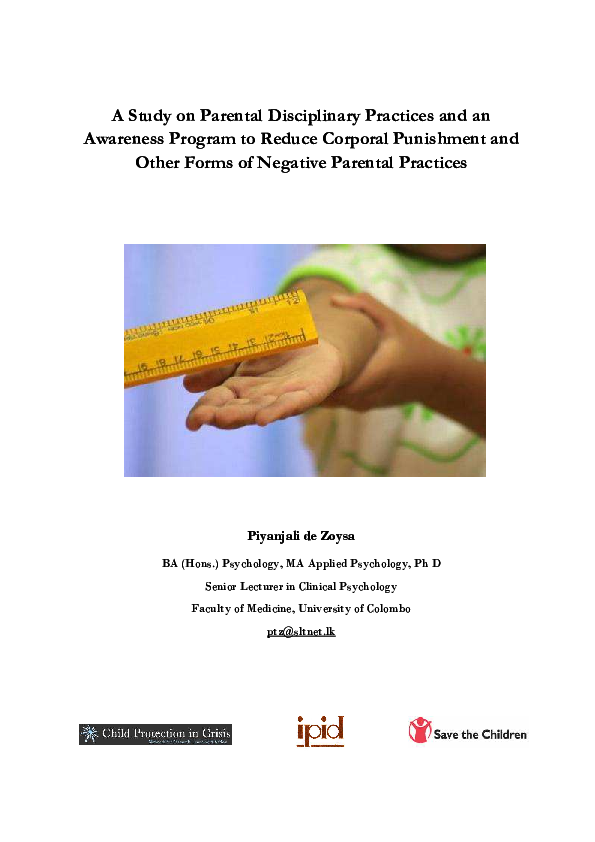 The present study was conducted among a community of parents (n=194) living in a suburb in the Colombo district. It aimed to provide information on the prevalence of parental use of corporal punishment and physical abuse on their children, both of which are physically forceful methods of disciplining. Further, the study explored these parents’ attitude towards the use of corporal punishment. This research also studied the prevalence of parental use of psychological aggression and non-violent disciplining strategies on their children. Finally, and importantly, this study included an investigative aspect where the study participants were involved in a two-hour information-giving cum discussion style program where they were informed of the negative repercussion of physical and psychological disciplining on their children. These parents were informed of techniques of skillful disciplining instead. Pre- and post-intervention data was gathered in order to investigate if there was a change in the parents’ use of physical, psychological and non-violent disciplining at post-intervention.

The results indicated a high prevalence of corporal punishment, psychological aggression, physical abuse as well as non-violent discipline amongst the study sample. Among other findings, the results also showed that parental use of corporal punishment and psychological aggression differed significantly by parents’ age and occupational status, but not by parents’ gender, ethnicity or religion. Importantly, the results of the intervention study indicated that there was a significant decline in parental use of corporal punishment, physical abuse and psychological aggression at post-intervention. Interestingly, there was also a significant decline in the parents’ use of non-violent discipline at post-intervention.

IPID, Save the Children, The CPC Network, Child Protection in Crisis