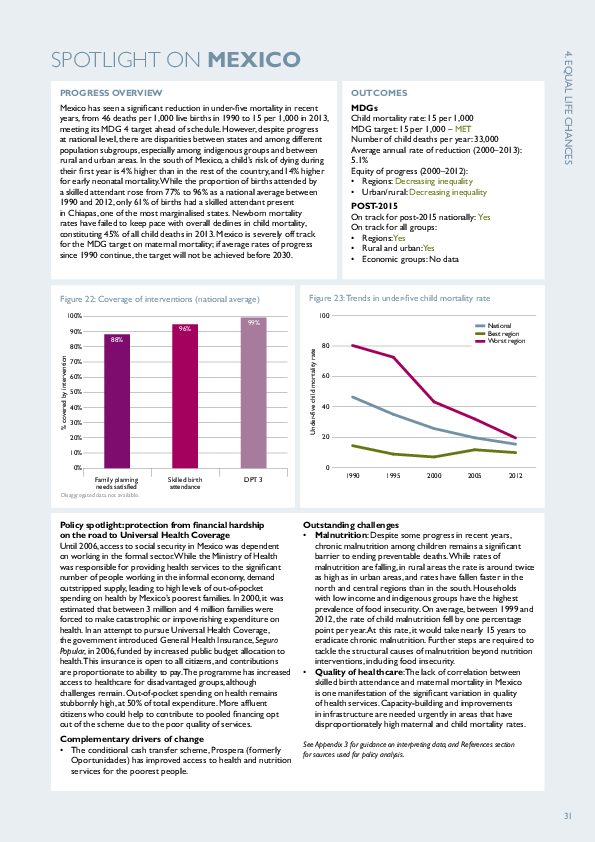 Mexico has seen a significant reduction in under-five mortality in recent years, from 46 deaths per 1,000 live births in 1990 to 15 per 1,000 in 2013, meeting its MDG 4 target ahead of schedule. However, despite progress at national level, there are disparities between states and among different population subgroups, especially among indigenous groups and between rural and urban areas. In the south of Mexico, a child’s risk of dying during their first year is 4% higher than in the rest of the country, and14% higher for early neonatal mortality. While the proportion of births attended by a skilled attendant rose from 77% to 96% as a national average between 1990 and 2012, only 61% of births had a skilled attendant present in Chiapas, one of the most marginalised states. Newborn mortality rates have failed to keep pace with overall declines in child mortality, constituting 45% of all child deaths in 2013. Mexico is severely off track for the MDG target on maternal mortality; if average rates of progress since 1990 continue, the target will not be achieved before 2030.

This brief describes Save the Children UK’s policy recommendations for improving the health of the children in Mexico.