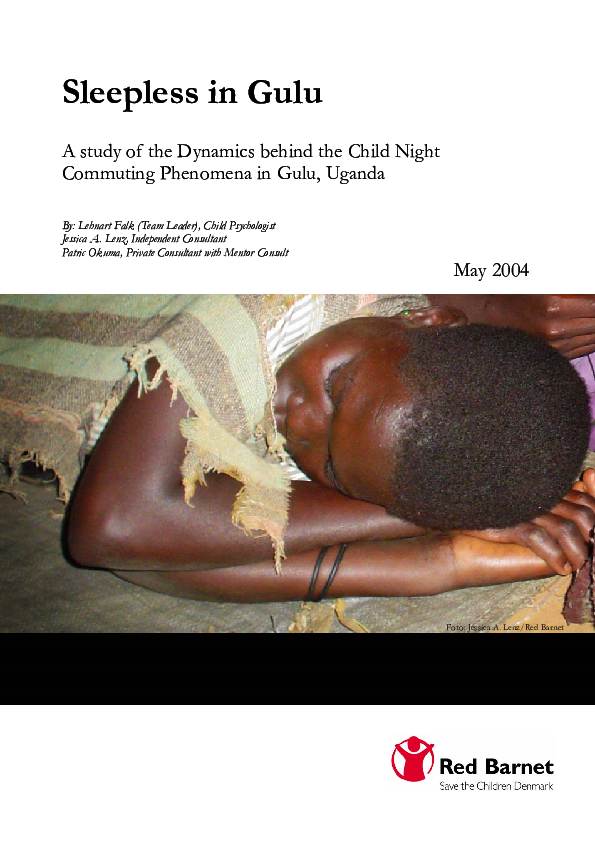 Sleepless in Gulu. A study of the dynamics behind the child night commuting phenomena in Gulu, Uganda

Save the Children Denmark

The “night-commuter” phenomenon started in 2003 after the Ugandan Army launched a military offensive against the Lord’s Resistance Army (LRA), a rebel group that has waged a civil war against the Ugandan Government since 1987. This led to an increase in the level of violence in northern Uganda and it is estimated that around 20,000 children have been abducted and enslaved by the LRA. To stay safe from the attacks and abductions at night, thousands of children and young people walk from their rural villages in the Gulu-district into the safer urban areas, to spend the night in public places and shelters. The study reveals the adverse impacts of commuting on society and child development. The objective of this study is: 1.to analyse the dynamics of night commuting by children and to provide insights into alternatives available for protection of the children affected by the armed conflict; and 2. to provide a framework for the development of child protection measures targeting the child night commuters

Sleepless in Gulu. A study of the dynamics behind the child night commuting phenomena in Gulu, Uganda

Save the Children Denmark