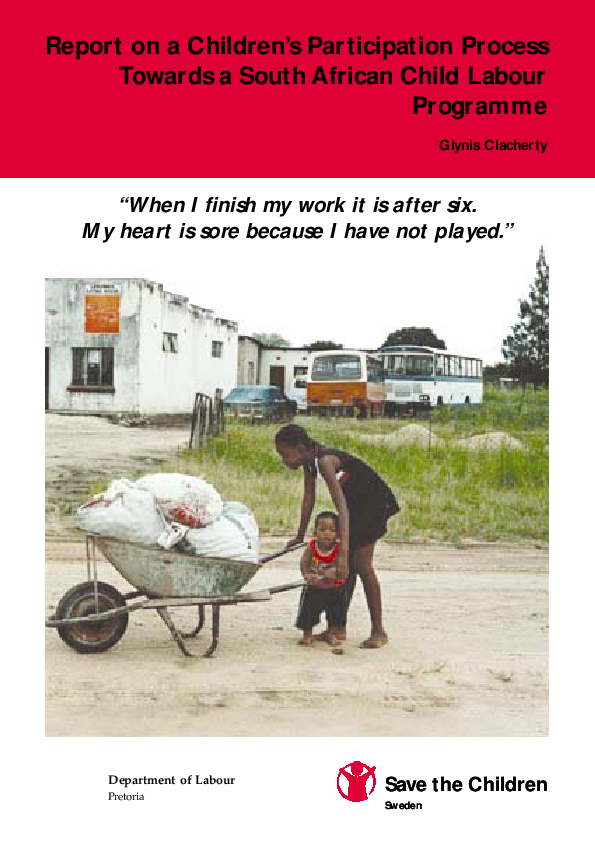 Report on a Children’s Participation Process Towards a South African Child Labour Programme. “When I finish my work it is after six. My heart is sore because I have not played.”

The research discussed in this report was conducted as part of a process of formulating a national child labour action programme for South Africa. It was aimed at obtaining the views of children doing work that may potentially be detrimental to their development. The South African government has embarked on a process towards the formulation of appropriate policies and a national action programme to combat child labour. The Department of Labour is the lead department. The first step in this process was to develop a reliable and credible database on child labour in the country. The 2002 survey is referred to as the Survey of Activities of Young People (SAYP). The survey results provide a national quantitative picture of child labour in the country, and give an appreciation of the different categories of working children who are most in need or who are at the greatest risk.). Findings of the SAYP included that 36% (4,8m) of South Africa’s 13,4m children were doing at least three hours of ‘economic’ work a week, or five hours or more per week of school-related work, or seven hours or more of household chores, more than 30% of the children aged five to fourteen years who are engaged in economic activities appear to be working in contravention of the law.

Report on a Children’s Participation Process Towards a South African Child Labour Programme. “When I finish my work it is after six. My heart is sore because I have not played.”

Department of Labour, Pretoria, Save the Children Sweden