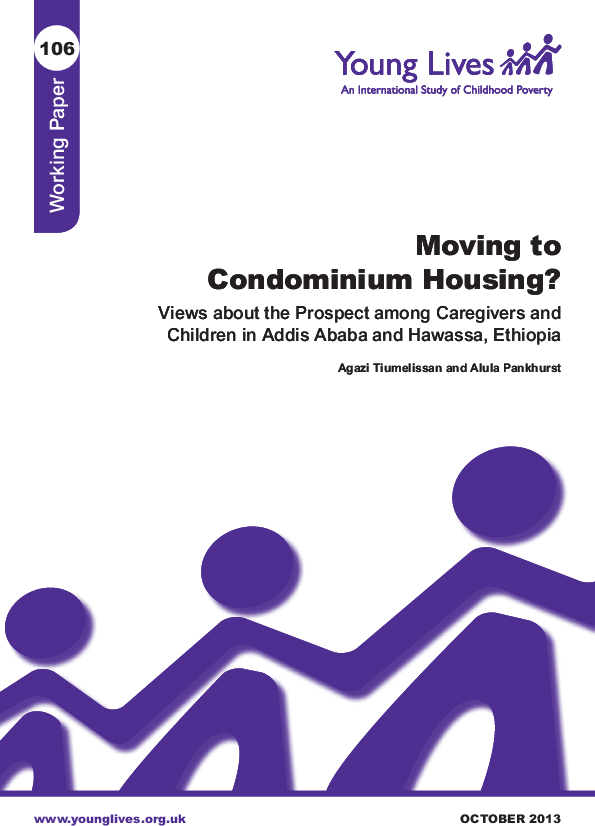 Moving to Condominium Housing? Views about the Prospect among Caregivers and Children in Addis Ababa and Hawassa, Ethiopia. Young Lives Working Paper No. 106

The urban landscape in Ethiopia is currently undergoing a fundamental transformation, with whole neighbourhoods in the centre of major cities being cleared for urban development. The urban renewal programmes have the twin objectives of promoting urban growth and providing improved housing for the urban poor. On the one hand, the clearing of areas without high-value buildings is viewed by developers as freeing urban space for the construction of office blocks, shopping centres and real-estate development. On the other hand, low-cost housing condominium apartments are being constructed by the government and offered to urban residents who were living in the areas that are being demolished and who can afford the down-payment and subsequent monthly payments. Some of these condominiums are close to these central areas that are being redeveloped and a larger number are being constructed on the outskirts of the city. This summary reports on a study carried out with families in four urban communities (three in Addis Ababa and one in Hawassa, the capital of the Southern Nations, Nationalities and People’s Region) that are due to be resettled when a planned redevelopment of these parts of the city centres starts. It provides baseline data on the views of children and their families about condominium housing prior to the planned move and will provide important evidence to compare with experiences of the respondents after the relocation.

Despite the desire of most caregivers and children to live in condominiums, many of them acknowledge that they will not be able to afford the costs which raises important questions about the viability of these low-cost housing schemes for the urban poor and suggests the need to reconsider ways of addressing their needs. The indications from  interviews with the few households who have already moved raise issues concerning the need to consider income generation, employment and services, notably education, alongside low-cost housing schemes.

Moving to Condominium Housing? Views about the Prospect among Caregivers and Children in Addis Ababa and Hawassa, Ethiopia. Young Lives Working Paper No. 106