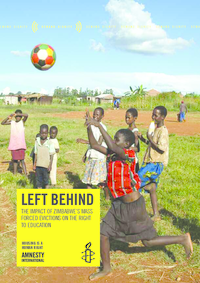 Left Behind. The impact of Zimbabwe’s Mass Forced Evictions on the Right to Education

Forced evictions drive poor people deeper into poverty and leave them more vulnerable to other human rights violations. This report looks at the long-term impact on the right to education since the Zimbabwean government’s programme of mass forced evictions, known as Operation Murambatsvina, took place in 2005. The report focuses on the situation of children and young people living in Hatcliffe Extension and Hopley, two settlements in Harare. More than six years since the mass forced evictions, children in the two settlements continue to face immense barriers in obtaining basic education.

Left Behind. The impact of Zimbabwe’s Mass Forced Evictions on the Right to Education