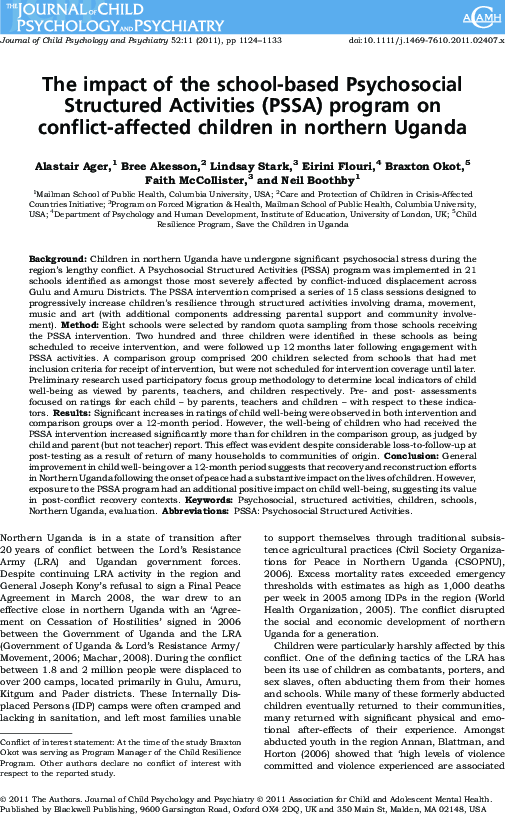 Children in northern Uganda have undergone significant psychosocial stress during the region’s lengthy conflict. A Psychosocial Structured Activities (PSSA) program was implemented in 21 schools identified as amongst those most severely affected by conflict-induced displacement across Gulu and Amuru Districts. The PSSA intervention comprised a series of 15 class sessions designed to progressively increase children’s resilience through structured activities involving drama, movement, music and art (with additional components addressing parental support and community involvement).

Eight schools were selected by random quota sampling from those schools receiving the PSSA intervention. Two hundred and three children were identified in these schools as being scheduled to receive intervention and were followed up 12 months later following engagement with PSSA activities. A comparison group comprised 200 children selected from schools that had met inclusion criteria for receipt of intervention, but were not scheduled for intervention coverage until later. Preliminary research used participatory focus group methodology to determine local indicators of child well-being as viewed by parents, teachers, and children respectively. Pre- and post- assessments focused on ratings for each child – by parents, teachers and children – with respect to these indicators.

Significant increases in ratings of child well-being were observed in both intervention and comparison groups over a 12-month period. However, the well-being of children who had received the PSSA intervention increased significantly more than for children in the comparison group, as judged by child and parent (but not teacher) report. This effect was evident despite considerable loss-to-follow-up at post-testing as a result of return of many households to communities of origin.

General improvement in child well-being over a 12-month period suggests that recovery and reconstruction efforts in Northern Uganda following the onset of peace had a substantive impact on the lives of children. However, exposure to the PSSA program had an additional positive impact on child well-being, suggesting its value in post-conflict recovery contexts.