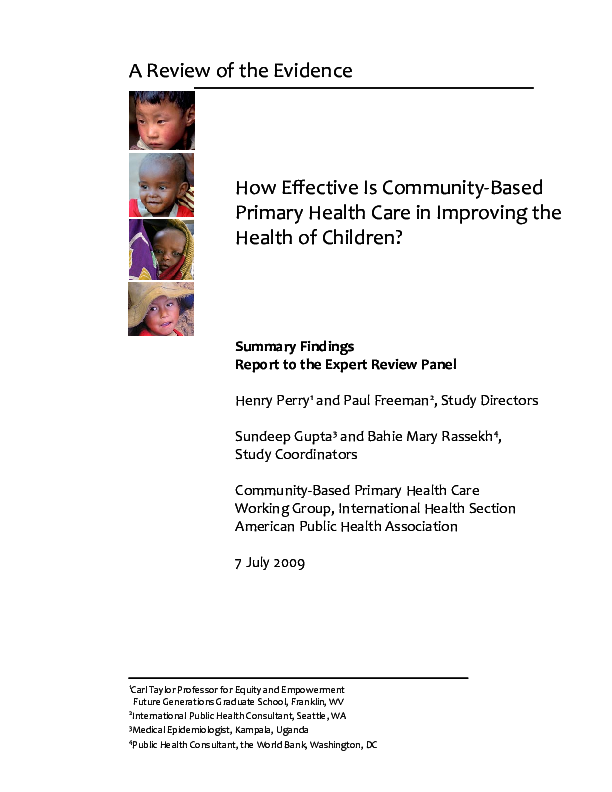 How effective is community-based primary health care in improving the health of children?

This report summarises current research findings concerning the effectiveness of community-based primary health care (CBPHC) in improving the health of children in high-mortality, resource-poor settings around the world. It is based on what is described here as a growing recognition that programmes which reach beyond the walls of health care facilities and which involve the community as partners have a great potential for helping achieve Millennium Development Goal (MDG) number 4, which calls for a two-thirds reduction by the year 2015 in the mortality of children aged less than 5 years. The findings of this review highlight the need to focus greater attention and more resources on CBPHC for improving child health in high-mortality settings. There is great value in giving a stronger role to communities (and especially to mothers) for improving child health. Mothers and communities have a strong vested interest in the survival of children. Related to this is the need to create structures which make it possible and feasible to delegate certain technical responsibilities to well-trained and well-supervised Community Health Workers, including identification of births for systematic referral for preventive interventions (such as immunization) and case management of neonatal sepsis, childhood pneumonia, and childhood malaria. Finally, independent assessments of large-scale program effectiveness in reducing under-5 mortality which are publicly available and which conform to international scientific standards are critical for continued improvements in programme effectiveness.”

How effective is community-based primary health care in improving the health of children?