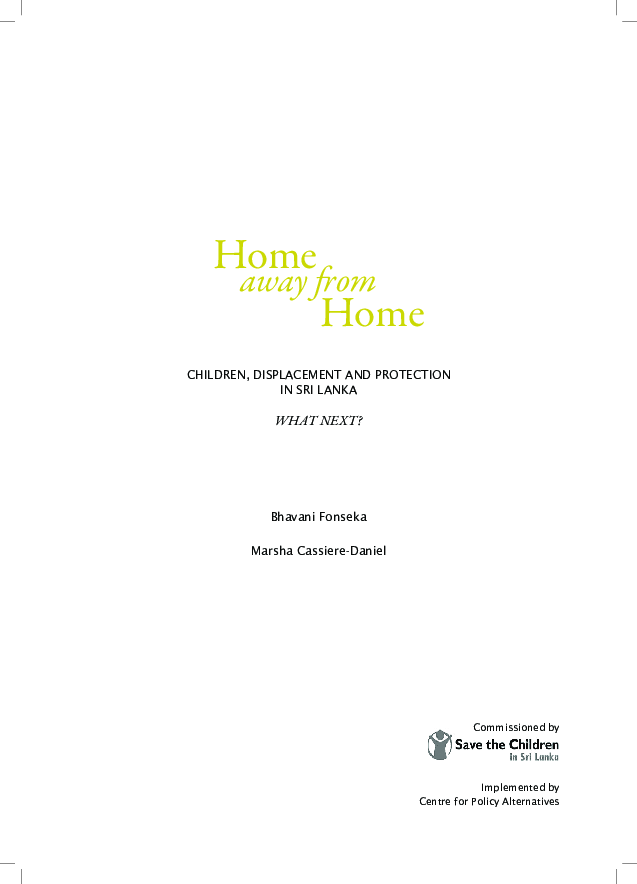 Home away from home. Children, displacement and protection in Sri Lanka. What next?

The armed conflict in Sri Lanka, spanning over two decades, has created several levels of affected persons, including those who have lost loved ones and family, those who have lost their land, home and property, and those who have lost their livelihoods and been displaced from their homes and communities. A distinct characteristic among the internally displaced persons (IDPs) is that many civilians in the North and East of Sri Lanka have been displaced numerous times due to both natural and manmade disasters. In such a context IDPs often live in temporary shelters and camps in some cases migrating to other districts in search of livellihoods and security. The constant uncertainty and the temporary nature of residence and migration have an impact on the quality of life of IDPs especially children. The recent hostilities since January 2006 further increased IDP figures with many civilians from the North and East yet again displaced. Home Away From Home. Children, Displacement and Protection in Sri Lanka. What Next? is a research project conceptualized by Save the Children in Sri Lanka to demonstrate how serious the impact of war and internal displacement were on children

Home away from home. Children, displacement and protection in Sri Lanka. What next?