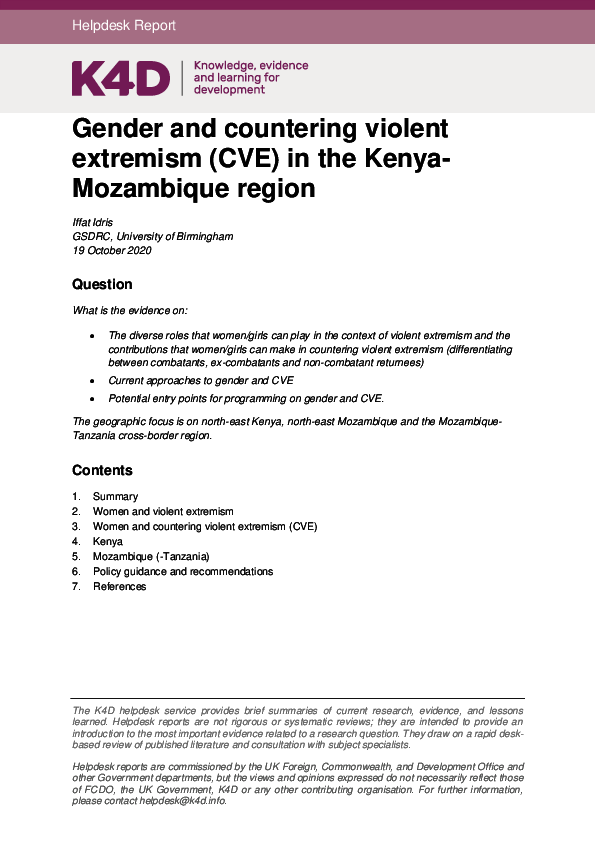 Gender and Countering Violent Extremism (CVE) in the Kenya-Mozambique Region

This summary synthesises evidence on the diverse roles that women/girls can play in the context of violent extremism and the contributions that women/girls can make in countering violent extremism in Kenya and Mozambique by drawing on a mixture of academic and grey literature. This report covers three main themes: the role of women in violent extremism and in CVE (drawing on global evidence); Kenyan women’s involvement in Al-Shabaab and approaches to CVE and gender in that country; and recommendations/guidance for gender and CVE programming. Previous recommendations on gender and CVE programming highlight three aspects: the need to carry out gendered analysis of violent extremism, to understand drivers and roles of women in relation to VE; the need to mainstream gender into all CVE activities; and the need to ensure participation of women and women’s organizations.

In 2019 the Global Counterterrorism Forum issued an update on its 2015 good practices on women and CVE particularly on Mainstream gender in CVE including promoting policy coherence with women, peace and security (WPS) frameworks; Develop a gender-sensitive approach to the handling of former combatants (and their families) and Design and support gender-responsive reintegration and rehabilitation processes and measures. In regard to areas for further research, the complete dearth of information on women and violent extremism in Mozambique and the Mozambique-Tanzania cross-border region clearly points to the need for research on these. More research is also needed to fill the ‘gaps’ in the evidence base on women and violent extremism in Kenya, notably the respective situations of female non-combatant, combatant,s and former combatant returnees.

Gender and Countering Violent Extremism (CVE) in the Kenya-Mozambique Region