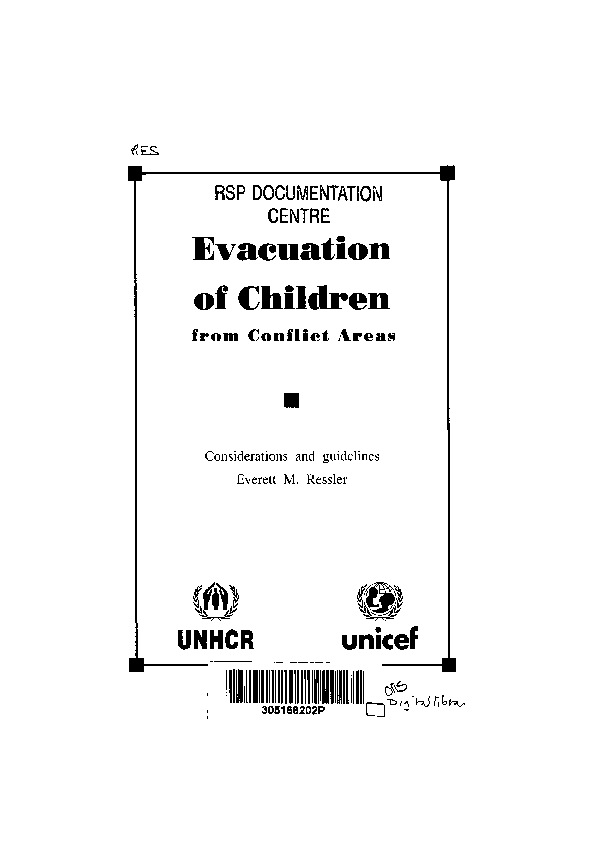 Evacuation of Children from Conflict Areas: Considerations and guidelines

This paper derives from a joint UNHCR/UNICEF mission to the former Yugoslavia in August/September 1992. In view of the persistent queries concerning the evacuation of children from the former Yugoslavia, UNHCR and UNICEF, supported by the International Committee of the Red Cross and the International Federation of the Red Cross and the Red Crescent Societies, saw the need to highlight the applicable principles and to spell out some practical guidelines to be respected if evacuation of children is considered. The statements and guidelines are presented as annexes to Everett Ressler’s essay.

This report was basically initiated in response to the situation in the former Yugoslavia. Many of the examples contained in it, however, are drawn from earlier conflicts where evacuation of children was considered necessary.  By presenting a review of previous evacuation experiences and a synthesis of some of the lessons which may be drawn from  them, this essay  attempts  to provide  information  that may be helpful to those who must decide and act. Other situations may arise where the lessons learned may again serve as an inspiration and where the annexed guidelines might be applicable.

Evacuation of Children from Conflict Areas: Considerations and Guidelines