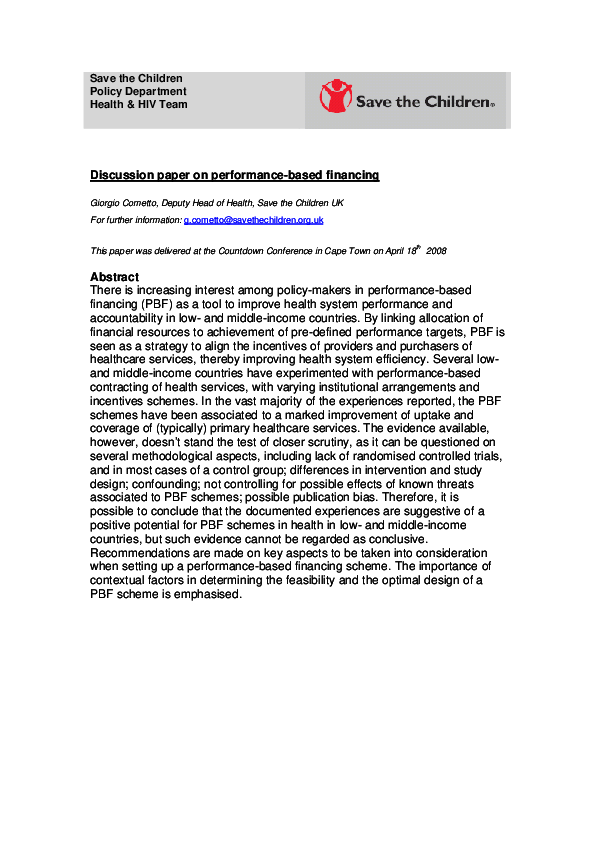 There is increasing interest among policy-makers in performance-based financing (PBF) as a tool to improve health system performance and accountability in low- and middle-income countries. By linking allocation of financial resources to achievement of pre-defined performance targets, PBF is seen as a strategy to align the incentives of providers and purchasers of healthcare services, thereby improving health system efficiency. Several lowa nd middle-income countries have experimented with performance-based contracting of health services, with varying institutional arrangements and incentives schemes. In the vast majority of the experiences reported, the PBF schemes have been associated to a marked improvement of uptake and coverage of (typically) primary healthcare services. The evidence available, however, doesn’t stand the test of closer scrutiny, as it can be questioned on several methodological aspects, including lack of randomised controlled trials, and in most cases of a control group; differences in intervention and study design; confounding; not controlling for possible effects of known threats associated to PBF schemes; possible publication bias. Therefore, it is possible to conclude that the documented experiences are suggestive of a positive potential for PBF schemes in health in low- and middle-income countries, but such evidence cannot be regarded as conclusive. Recommendations are made on key aspects to be taken into consideration when setting up a performance-based financing scheme. The importance of contextual factors in determining the feasibility and the optimal design of a PBF scheme is emphasised.