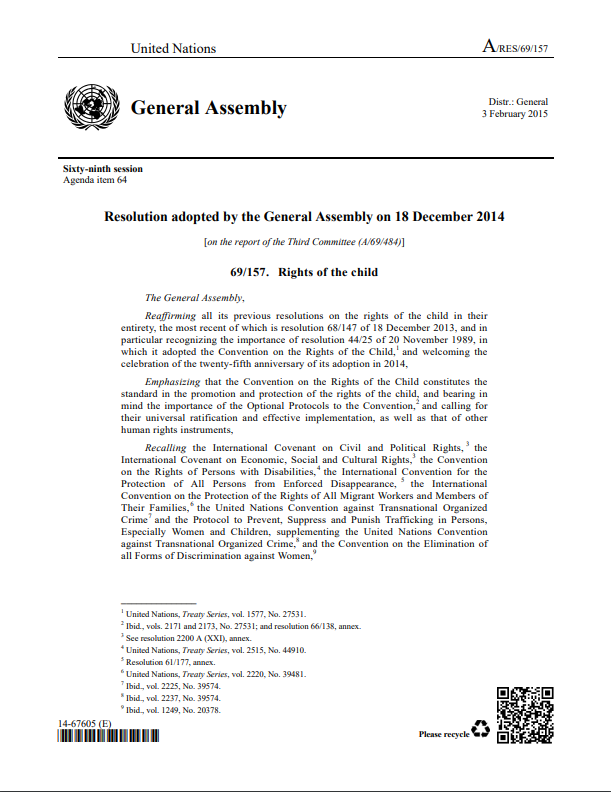 OHCHR, The Office of the United Nations High Commissioner for Human Rights

Children are being detained at a younger and younger age and held for longer periods of time. The personal cost to these children is immeasurable in terms of the destructive impact on their physical and mental development and on their ability to lead healthy and constructive lives in society.

The associated financial costs to governments can also have a negative impact on national budgets and can become a financial drain when their human rights obligations are not upheld with regard children deprived of liberty.

To address this situation, in December 2014 the United Nations General Assembly (UNGA) adopted its Child Rights Resolution (A/RES/69/157), inviting the United Nations Secretary-General (SG) to commission an in-depth global study on children deprived of liberty (§ 52.d). On 25 October 2016, the Secretary General welcomed the appointment of Professor Manfred Nowak as Independent Expert to lead the Study. By Resolution 72/245, the UNGA invited the Independent Expert to submit a final report on the Study during its seventy-fourth session in September 2019.

Based on the over-all mandate established by the UNGA Resolution, the following core objectives of the Global Study have been identified:

The United Nations Global Study on Children Deprived of Liberty

OHCHR, The Office of the United Nations High Commissioner for Human Rights