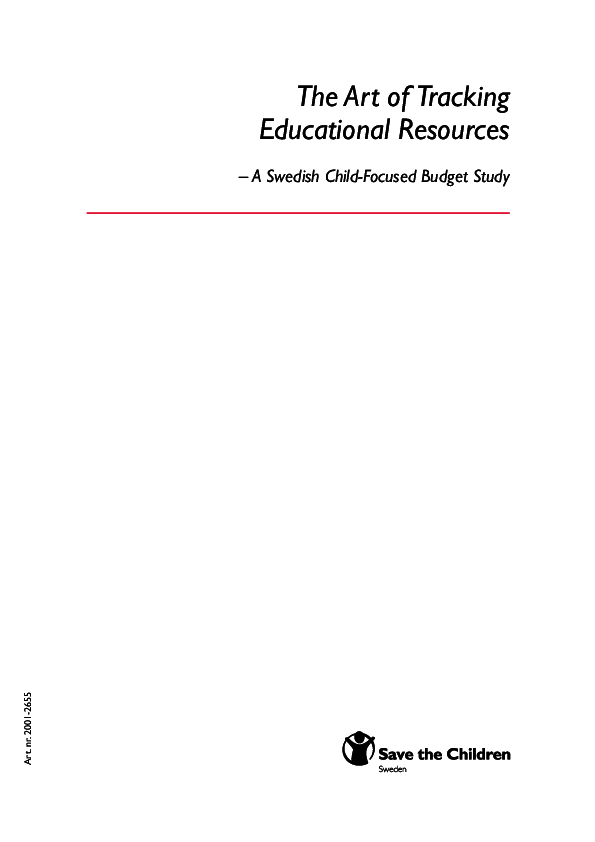 The Art of Tracking Educational Resources –  A Swedish Child-Focused Budget Study, has been produced as part of an international project about the development of methods for budget analysis in seven of the countries participating in Save the Children Sweden programmes: Ethiopia, El Salvador, Peru, South Africa, Sweden, Vietnam, and the West Bank and Gaza. Each country has selected the subject of its budget study on the basis of specific national conditions.

The Swedish Child-Focused Budget Study focuses on financial resources in the compulsory school system with emphasis on the municipal level which is where the most important financial decisions affecting schools are taken. The study shows the effects on pupils of the cutbacks made in schools in the 1990s. Two municipalities were selected for closer examination in this report: Malmö and Sandviken. Malmö is a major city municipality, Sandviken is an industrial municipality. The document examines economic trends in the municipalities, first by comparing spending on education, and then by presenting the results of a questionnaire study carried out in a handful of schools in the municipalities.The study also includes a children’s checklist – a simple guide for individuals and groups who want to study the resources allocated to schools by the local authorities in their neighbourhood.

Children's rightsEducation systemsSchoolsUN Convention on the Rights of the Child