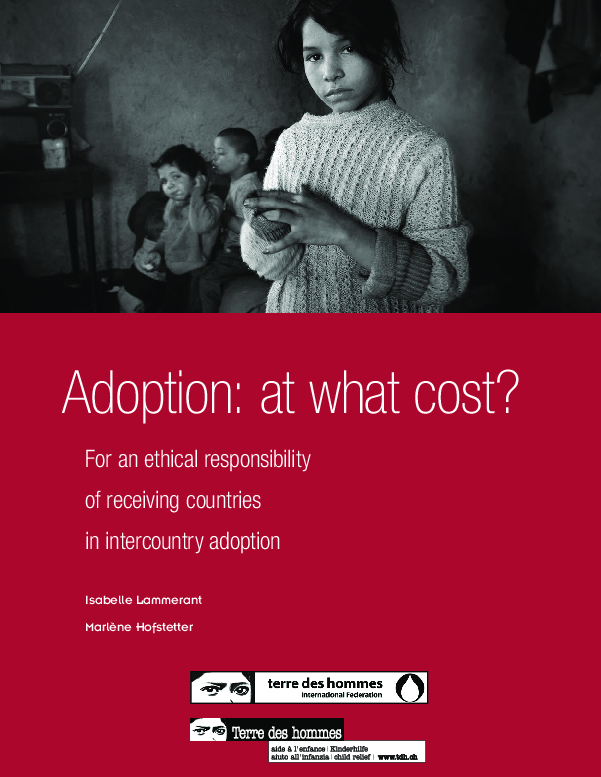 Adoption: at what cost? For an ethical responsibility of receiving countries in intercountry adoption

This study of Terre des hommes compares and analyses the laws and practices in intercountry adoption of six European countries (France, Germany, Switzerland, Norway, Spain and Italy), and develops a series of recommendations for good practices aimed at fighting child trafficking and promoting intercountry adoption on the basis of the rights of the child. Focus has been given for many years on the practices of the countries of origin. They have been found to be too lax or too corrupt, and considered to be responsible for the downward slide in standards for intercountry adoption. In this publication, Terre des hommes child relief (Tdh), under a mandate by Terre des Hommes International Federation (TDHIF), shows how the receiving countries also have a certain responsibility. With procedures and legislation which have little, if any, respect to the interests of the child, and policies which tend to respond to the demands of adopting couples or put pressure on the countries of origin in order to obtain children, the receiving countries do not respect the engagements they undertook by ratifying the Hague Convention on international adoption. It is the Hague Convention itself which aims to avoid these types of dysfunction.

Adoption: at what cost? For an ethical responsibility of receiving countries in intercountry adoption