Only a child, already a mother

Globally, adolescent pregnancy implies a higher risk of maternal and infant mortality. It limits girls’ opportunities to learn, as pregnant girls many times have to drop out of school. Vulnerability to poverty, exclusion and dependency increases for young mothers as well as for their children.

In some cases, adolescents wish to get pregnant. However, in many contexts around the world, adolescent pregnancy can be a result of poverty, discrimination, and a lack of girls’ empowerment. It may be a consequence of gender-based violence, sexual violence or harmful traditional practices such as when girls are forced into child marriage. In many countries and communities, children, especially girls, have no say in whom or when to marry.

Many adolescents lack access to qualitative sexual and reproductive health information and services, which is a fundamental right for all human beings. Even where women and girls do have access to these kinds of services, they are often unable to exercise their rights due to social barriers or lack of gender equality. Women and adolescent girls in many parts of the world are not free to make decisions over their own body such as deciding when, or whether or not to have children.

The consequences of teen pregnancy can be many and grave, and there are both immediate and long-term effects. According to the 2013 State of the World Population Report- Motherhood in Childhood: Facing the Challenge of Adolescent Pregnancy, released by the UN Population Fund (UNFPA), 95 % of the world’s adolescents’ births occur in developing countries. According to the report, around 70,000 adolescents die each year of causes related to unsafe abortions or complications during pregnancy and childbirth. Mothers under 15 are twice as likely to die from complications in pregnancy or childbirth as women between the ages of 20 and 30, according to the recent Save the Children report Every Last Girl – free to live, free to learn, free from harm, part of Save the Children’s wider campaign Every Last Child. 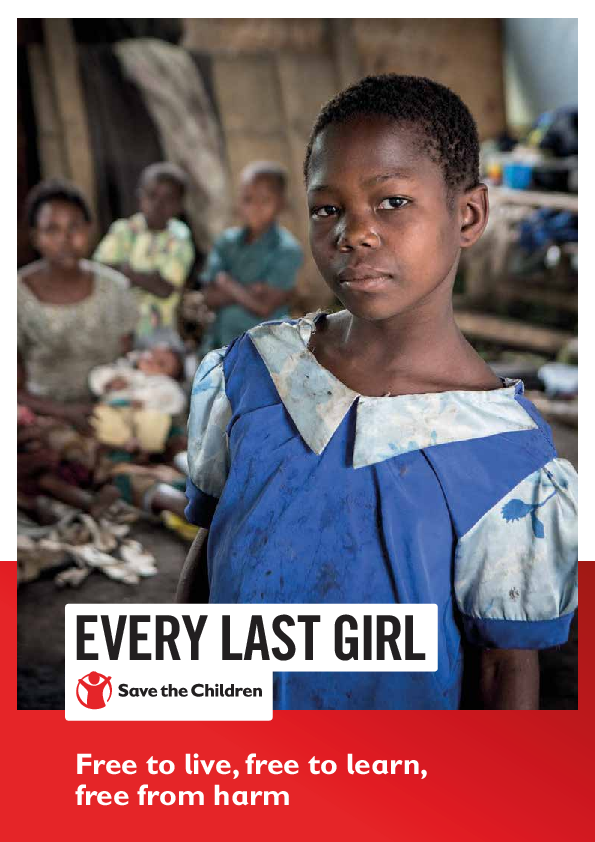 This is because, in many cases, young girls’ bodies are not fit to bear children. In addition, the risk of infant mortality is twice as high for infants of adolescent mothers as compared to infants of mothers aged 20-29, according to Motherhood in Childhood: Facing the Challenge of Adolescent Pregnancy. Among the risks facing infants of adolescent mothers is a greater chance of premature birth or stillbirth. The report states that governments’ interventions have been focused on older adolescents. The report emphasizes the need of focusing more on the very young adolescents aged 10-14, who are the most vulnerable and often overlooked in the design of programmes.

While Niger has the highest adolescent pregnancy rate globally, Mexico holds first place amongst OECD countries. In Mexico, one out of five births are from adolescents, according to Save the Children’s Every Last Child: Mexico country spotlight”.

This is due to a combination of factors, such as: lack of access to quality sexual and reproductive health services, poverty and discrimination, a high degree of sexualized violence and a culture of masculine dominance over women which in some cases may prevent women making their own decisions. This is especially relevant in rural and indigenous communities.

Mexico is a country with a high level of uneven distribution of wealth and resources, and seven out of 32 states host more than half of the people living in poverty in the country. 73,2 % of indigenous people live in  poverty and of them, 31,8 % live in extreme poverty (Every Last Child: Mexico country spotlight). Girls from indigenous, rural communities thus experience a mixture of exclusion: that of poverty, discrimination and inequality because of their ethnicity and gender. Although the practice is illegal, child marriage is still common within indigenous communities.

Save the Children is campaigning at an international and national level to achieve the greatest impact for children with the Every Last Child Campaign.The Sustainable Development... View Full Abstract

Marta (not her real name) lives in the Mexican northwestern state Sinaloa. She is sixteen years old and studied until the third grade secondary level.

“Right now, I cannot go to school because I have a newborn baby who just turned a month old. I have permission to return to school when the holidays end, but I worry about going back to school and leaving my child alone, as I do not know how I will be able to feed him.”

Each year, around 76,000 migrant farm workers arrive in Sinaloa to harvest corn and vegetables. Most of these migrants are from indigenous minorities in the poorest southern states; Chiapas, Oaxaca and Guerrero. Many decide to settle in Sinaloa. Poverty, labour exploitation, addiction, violence, and rape are common. Teenage pregnancy is very common in these areas.

Marta says she met her husband in the fields where she used to work cutting tomatoes, cucumbers and hay. Now, she is no longer working.

Marta (not her real name), Sinaloa, Mexico: “When I got to know that I was pregnant I got very excited. Now that I am a mother, my responsibility is to be at home, where I must cook and do laundry among other chores while I wait for my husband to come home from work. I need to get up every day at 5am to prepare breakfast. My main concern, if I go back to school, is who will care for my son while I'm gone.”

In certain contexts in Mexico, adolescent girls desire pregnancy; it can be a way for them to raise their social status as motherhood is a respected role within their society. The sad reality, however, is that these girls often have to abandon their studies to take care of their children, diminishing their opportunities in life. They and their children end up living in poverty, thereby repeating the vicious cycle of poverty.

Globally, when an adolescent girl gets pregnant, her education is often interrupted, limiting her opportunities for the future. In some countries, for example Sierra Leone, girls who are visibly pregnant are not allowed to attend school or to take exams. Sierra Leone’s prohibition of pregnant girls taking exams and attending school has long-term implications in a country where just a little more than half of all girls aged 15-24 are literate (Amnesty 2015: Shamed and Blamed).When girls drop out of school, their vulnerability to poverty, exclusion and dependency increases.

Photo: Louis Leeson - Save the Children

In Sierra Leone, which has one of the highest teenage pregnancy rates in the world, teenage girls account for 40% of all maternal deaths. During the Ebola outbreak in Sierra Leone, the closure of schools and lack of protection for girls contributed to a sharp rise in teenage pregnancy. Pregnant girls are also not allowed to attend school and take exams. (Every Last Girl)

Apart from facing greater risks in pregnancy and childbirth, girls without a secondary education are also more likely to have children who become malnourished and poorly educated. Education can be one of the most powerful tools in terms of breaking the intergenerational cycle of poverty: maternal education is linked to lower rates of child marriage, less risk during pregnancy and childbirth, and better child survival, nutrition and learning (Every Last Girl – free to live, free to learn, free from harm). Evidence also shows that girls staying in school are less likely to become pregnant at a young age or get married early.

In Mexico, Save the Children is working to improve the situation for girls aged 10 to 19 who are not exercising their sexual and reproductive rights. The majority are from indigenous communities, rural and low-income urban areas. Save the Children runs the Programme “School Building Peace”, where teenage girls are provided spaces for listening and discussion on sexual and reproductive health. The aim is to empower teenage girls to exercise their rights. Currently this program works with around 8,000 adolescents in Mexico, in five states characterized by high rates of violence and teen pregnancy (Sinaloa, Chiapas, Guerrero, Nuevo León and Baja California).

Denisse (17 years old) with her daughter Nadia is attending the School Building Peace Programme. Now she feels more confident and has applied to enter university. She wants to convey to all teenagers who are part of “Schools Building Peace” the risks of being young mother.

Read more about Save the Children’s calls on governments and other stakeholders to make three key Guarantees to Girls: Fair Finance, Equal Treatment and Accountability

Save the Children is campaigning at an international and national level to achieve the greatest impact for children with the Every Last Child Campaign.The Sustainable Development... View Full Abstract 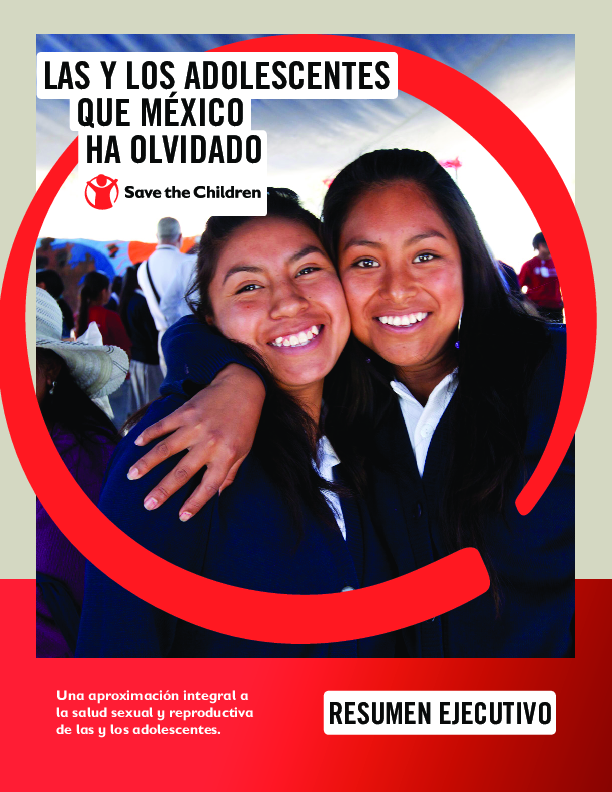 Save the Children is campaigning at an international and national level to achieve the greatest impact for children with the Every Last Child Campaign.While there has been... View Full Abstract 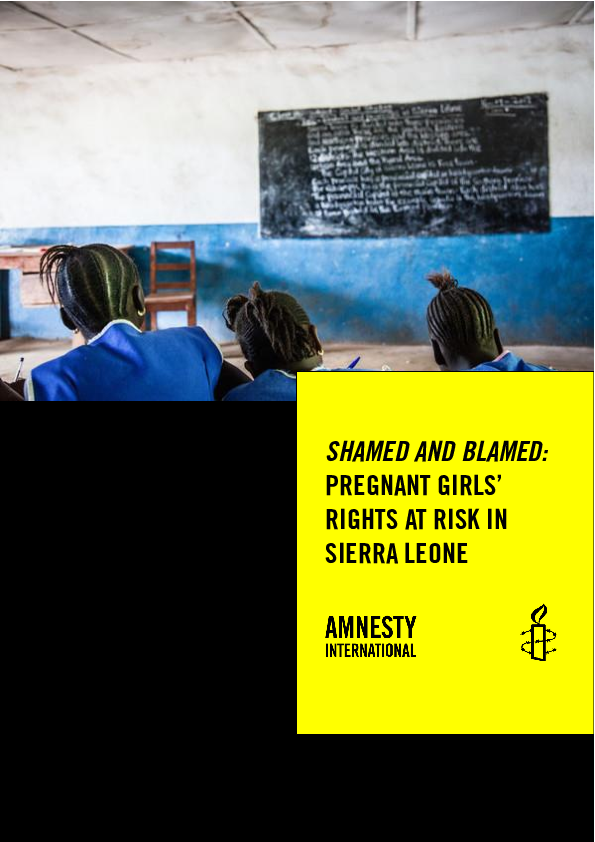 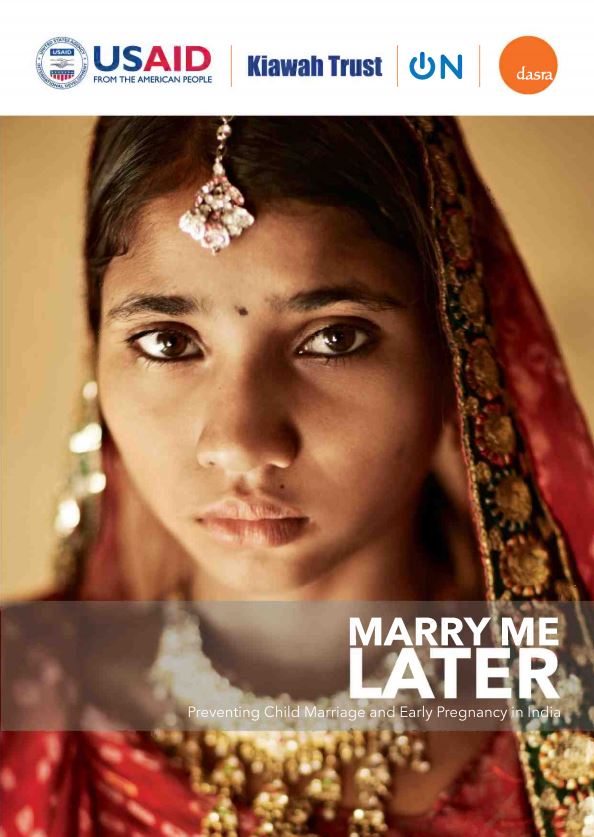 Marry Me Later analyzes the prevalent problem of child marriage in India, as well as progress made to curb its progression. In addition, the report identifies high potential... View Full Abstract 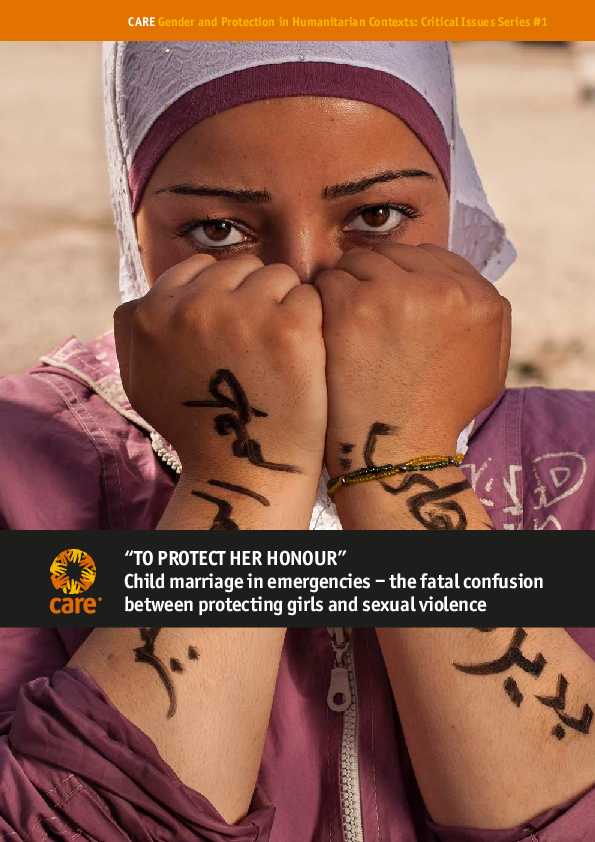 “To Protect Her Honour”: Child marriage in emergencies – the fatal confusion between protecting girls and sexual violence

Published by CARE International, this publication is part of the Gender and Protection in Humanitarian Contexts: Critical Issues Series, which is designed to inform and highlight... View Full Abstract 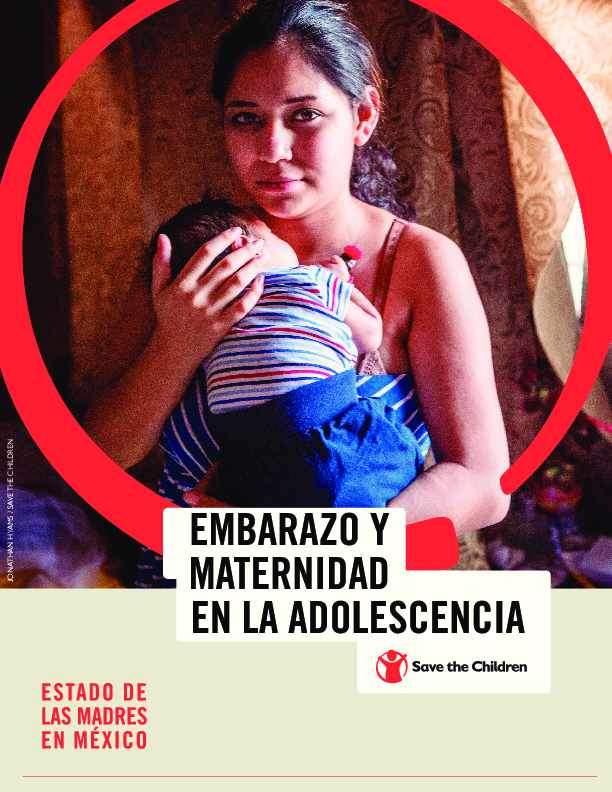 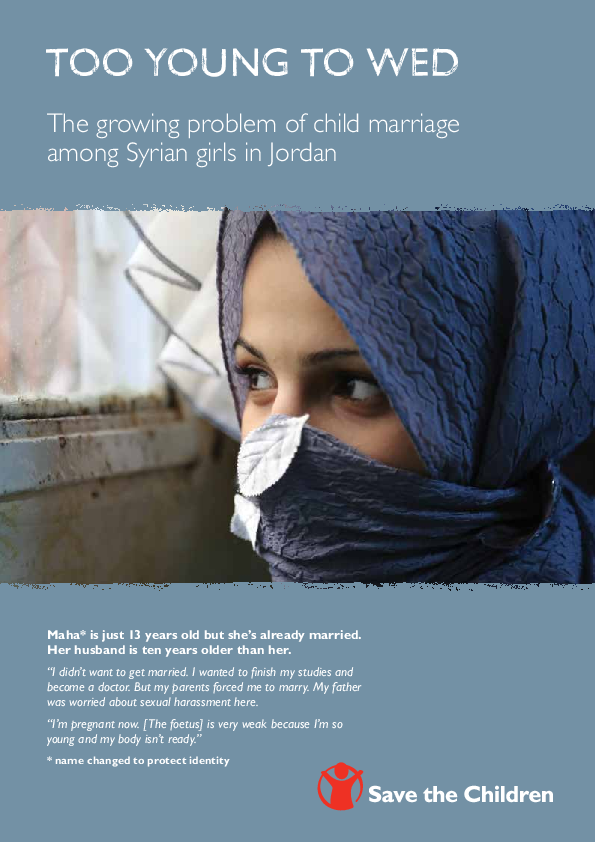 Too Young to Wed: The growing problem of child marriage among Syrian girls in Jordan

This briefing focuses on a less publicized consequence of the crisis in Syria: &nbsp;the rising number of refugee girls who have been forced to marry. Refugee communities in Jordan... View Full Abstract 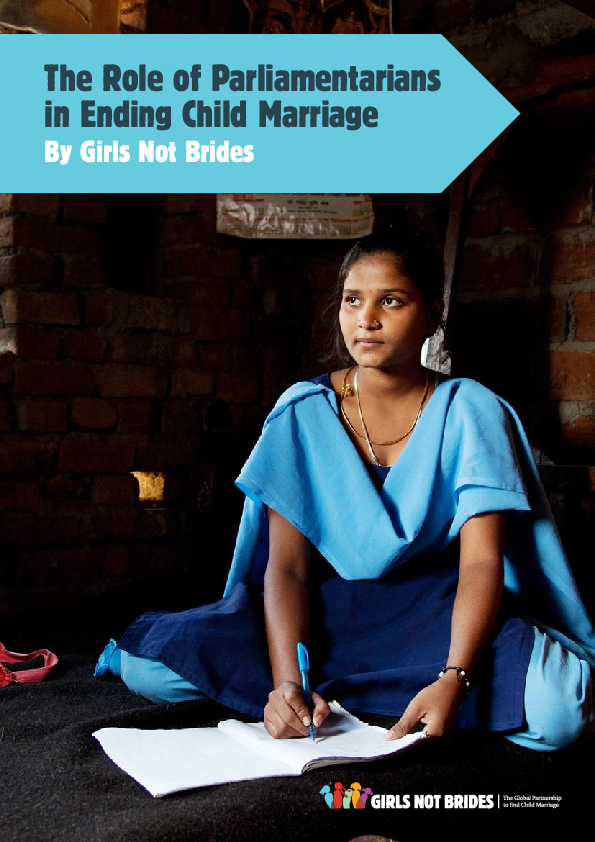 The Role of Parliamentarians in Ending Child Marriage

Girls Not Brides is a global partnership of more than 400 civil society organisations working to address child marriage. This toolkit aims to provide Members of Parliament (MPs)... View Full Abstract 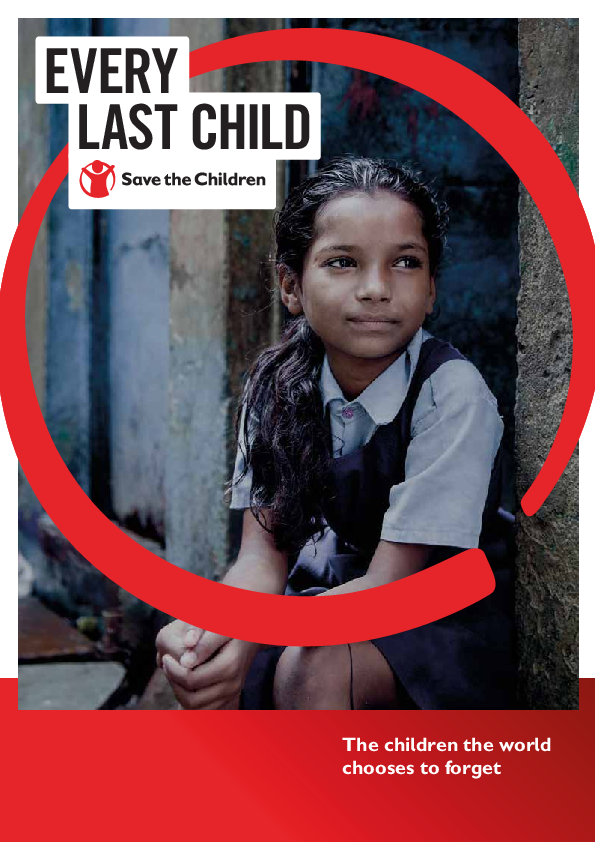 Every Last Child: The children the world chooses to forget

Extreme poverty continues to be a fatal outrage, but a disproportionate number of children who die or lose out on education are not ’just’ poor. Whether they live in a rich country... View Full Abstract 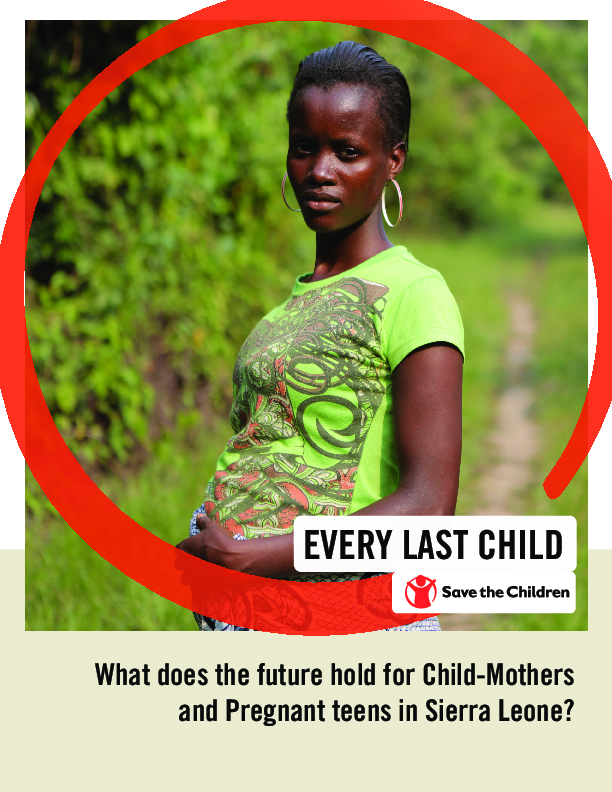 Save the Children is campaigning at an international and national level to achieve the greatest impact for children with the Every Last Child Campaign.High teenage pregnancy rate... View Full Abstract