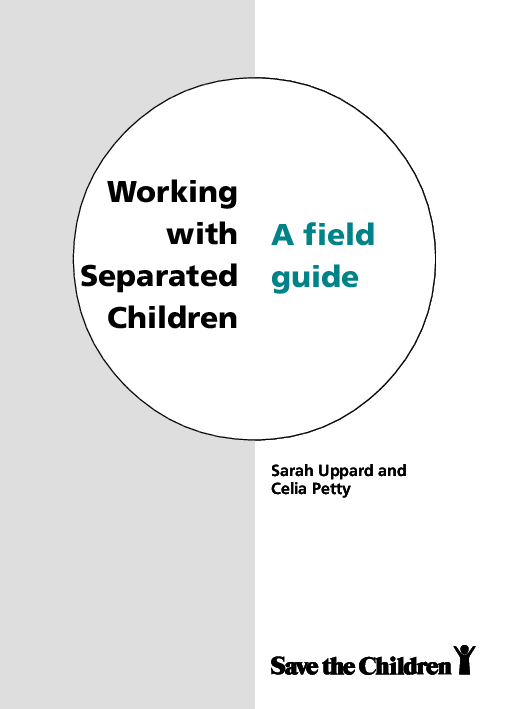 Working With Separated Children: A field guide and training

Children become separated from their families in many different emergency situations. Although this guide is in part a response to the situation that arose in the Great Lakes region after the 1994 genocide in Rwanda, it is not solely concerned with children separated by conflict. In famine and natural disasters, the principles of policy co-ordination, prevention of separation and community-based support we describe are equally relevant. The significance of the Rwanda crisis was that it drew many agencies into work with children whose parents had been killed or who had been separated from their families. Some of these agencies had no previous experience of this kind of work and were unfamiliar with its basic concepts; most others had to bring in staff who may have been experienced in emergencies but were new to work with separated children.

Apart from the problem of finding and training field staff, the Great Lakes emergency caused agencies to look more carefully at some of the generic problems that face children in all emergency situations: for example, how families deal with the poverty and destitution caused by the emergency, and how relief interacts with informal systems of care and social support. In writing this guide, we have tried to clarify the basic principles that should guide agencies who have to deal with these issues.

The crisis in the Great Lakes was on such a scale that the larger and more experienced agencies — such as the International Committee of the Red Cross and Red Crescent (ICRC), the United Nations High Commissioner for Refugees (UNHCR), the United Nations Children’s Fund (Unicef) and international non-governmental organisations (NGOs) such as Save the Children — had to find new ways of collaborating and of co-ordinating their work with separated children. Although no two emergencies are ever the same, the basic principles for collaboration that emerged from the Great Lakes region are highly relevant elsewhere and have already influenced work in other regions, notably West Africa, and in famine situations such as South Sudan, 1998.

This guide describes those principles and the roles and responsibilities of the agencies that take part. Finally, many agencies working with children separated by emergencies have been drawn into broader social welfare issues in the post-emergency period.

This field guide deals with the transition from emergency intervention to longer-term programming, and the strategic issues that agencies must consider in making this transition. More specifically, in post-conflict work, children separated by conflict are likely to be part of a far larger group of children who are separated from their parents for social and economic reasons. Enclosed is also a complementary training guide.