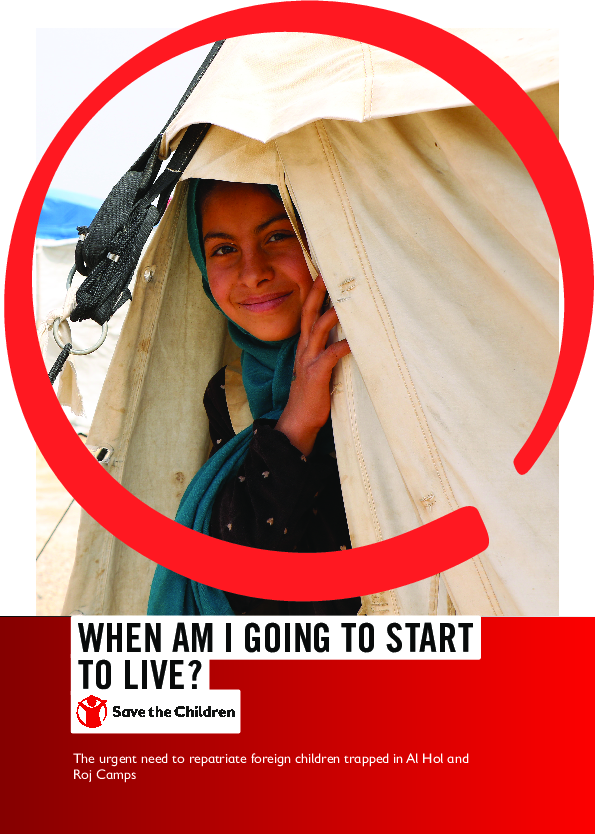 When am I Going to Start to Live? The urgent need to repatriate foreign children trapped in Al Hol and Roj Camps

Al Hol and Roj camps in North East Syria (NES) are home to over 60,000 people, the vast majority of them women and children. Their populations are made up of Syrians and Iraqis – many of whom arrived in the camp fleeing from violence and conflict caused by ISIS – as well as women and children from some other 60 countries across the world (known as Third Country Nationals, or TCNs), who lived in areas controlled by ISIS and were moved to the camps after military campaigns to dislodge ISIS in from 2017 into early 2019.

Conditions in the camps, particularly in Al Hol, are dire. Al Hol is severely overcrowded and an unsuitable place for children. Services are limited and critically overstretched and shelter is inadequate. The scale of the violence, hardship, deprivation, and trauma that children living in these camps experience every day cannot be overstated.

This paper sets out the conditions that all children in the camps – Syrian, Iraqi, or from elsewhere in the world – are forced to endure every day.  It sets out the major obstacles for Iraqi and TCN children to be able to return to their home countries, and the importance that these obstacles are addressed by their governments. The paper also makes a series of recommendations for the safe and dignified return of children and their families to their places of origin, as well as for an expanded humanitarian response in the camps that is better equipped to respond to the needs of foreign and Syrian children.

When am I Going to Start to Live? The urgent need to repatriate foreign children trapped in Al Hol and Roj Camps