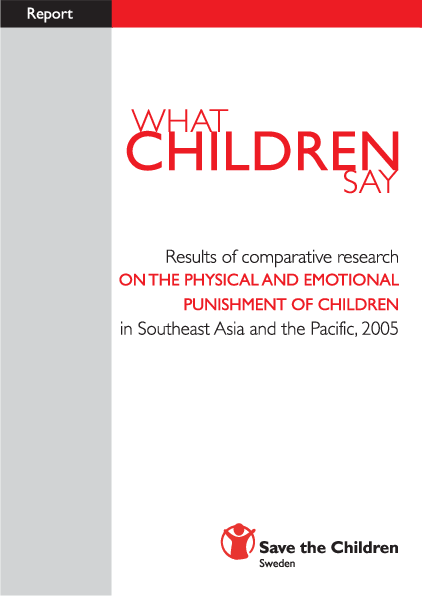 What Children Say: Results of a comparative research on the physical and emotional punishment of children in South East Asia and the Pacific, 2005

This research records what 3,322 children from eight countries in the Southeast Asia and the Pacific region told researchers about everyday, common violence – both physical and emotional – used as punishment against them. It used a systematic, scientific approach, which sought information about children’s knowledge, experiences and views, using appropriate methods through which they could express themselves easily and without being harmed. The findings highlight the extraordinary levels and types of violence to which children are subjected in the name of discipline and childrearing – a violence that becomes part of their psychological and social makeup and thus integral to all levels of society and all human relationships. One clear message from this research is that a contradiction is revealed when what children say is compared with what adults say. Although adults say direct assaults are not an appropriate way to punish children, children report the main form of punishment they receive is direct assaults. Adults do not act according to what they say they believe. This leaves children with a range of problems when they try to assimilate the obvious contradictions in the discipline they receive.

What children say: Results of a comparative research on the physical and emotional punishment of children in South East Asia and the Pacific, 2005