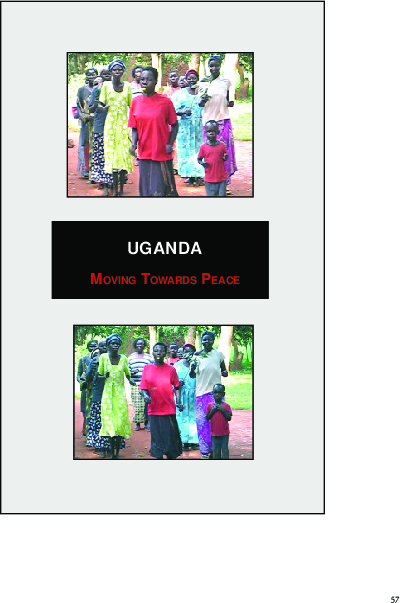 ‘Uganda Moving Towards Peace’ by Children/Youth as Peacebuilders (CAP), tells about northern Uganda’s conflict which broke out in 1986 between the Ugandan armed forces and the Lord’s Resistance Army (LRA) and ravaged northern Uganda for 20 years. Years of brutal conflict and violence in northern Uganda have had a devastating impact on child and adolescent wellbeing. The Lord´s Resistance Army (LRA) has abducted tens of thousands of children since the conflict started, for use as soldiers, sex slaves and domestic workers. The Uganda country profile overview is part of a study entitled “Vicious Circles: Sexual Violence Against Young People in Cambodia, Colombia and Northern Uganda” regarding children and youth living in conflict and early post-conflict situations and their participation in peace building in ways that are relevant to their experiences of war. The report shows the link between war-related violations and civilian life, revealing the overlap between these two increasingly merging worlds. It also includes quoted testimonies, statistics, artwork and interviews.