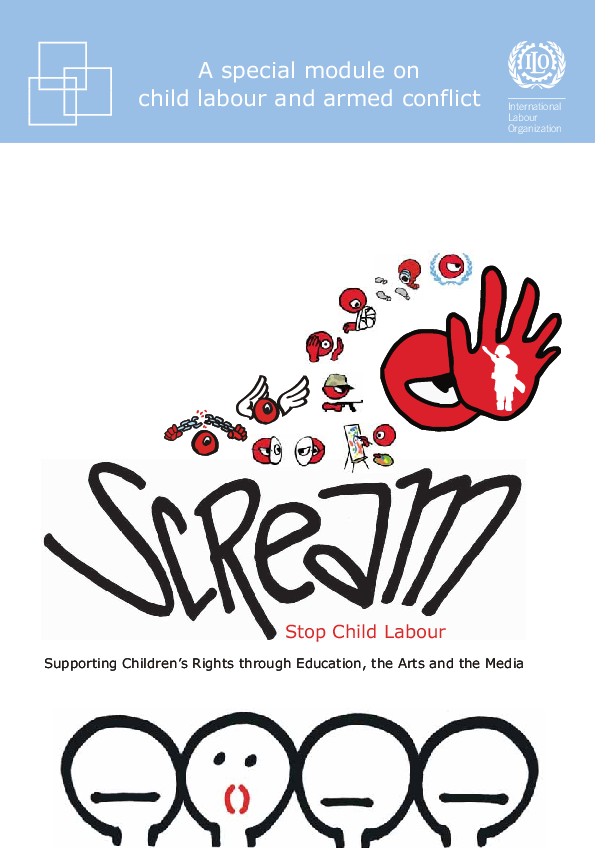 Supporting Children’s Rights through Education, the Arts and the Media (SCREAM): A special module on child labour and armed conflict

Although progress has been made in the struggle to end child labour, much more remains to be done. An important step is to mobilize, educate and empower people, especially young people. To this end, the ILO’s International Programme on the Elimination of Child Labour launched the “SCREAM – Supporting Children’s Rights through Education, the Arts and the Media – Stop Child Labour” programme to empower children and youth to actively participate in the global campaign against child labour and bring about change in society. The methodology equips young people with knowledge and skills to convey their messages through different forms of artistic expression, such as drama, creative writing, drawing and music and in a manner specific to their culture and traditions.

This SCREAM Special Module will contribute to sensitizing young people around the world about child labour and armed conflict and, in particular, the use of children by armed forces and groups, one of the gravest violations of children’s rights. The participatory methodology will mobilize young people’s commitment and creativity to become motivated advocates and agents of change in fighting violence against children and promoting a culture of peace in our inter-dependant world. More specifically, this Module, when used in areas affected by armed conflict, will be an effective tool to prevent child recruitment and also to promote the community acceptance of children released from armed forces and groups.

SCREAM: A special module on child labour and armed conflict