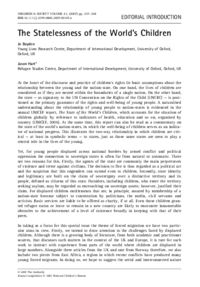 The Statelessness of the World’s Children

The purpose of this special issue on The Statelessness of the World’s Children is twofold : Firstly, it is intended to draw attention to the challenges faced by displaced children. Although there is a growing body of literature from both academic and practitioner sources that discusses such matters in the context of the UK and Europe, it is rare for such work to interact with experience from parts of the world where children are displaced in large numbers. Alongside three articles from the UK and one from Norway, the report also includes two pieces from East Africa, a region in which recent conflicts have produced many young forced migrants. The second aim is to draw attention to the role of institutions in creating or mediating the challenges of displacement. Issues of asylum policy, adjudication and service provision are addressed. Read together, the various articles urge greater attention not only to the competence of the relevant authorities in dealing with displaced children but also, in some cases, to the politics that inform evolving policy.

The Statelessness of the World’s Children