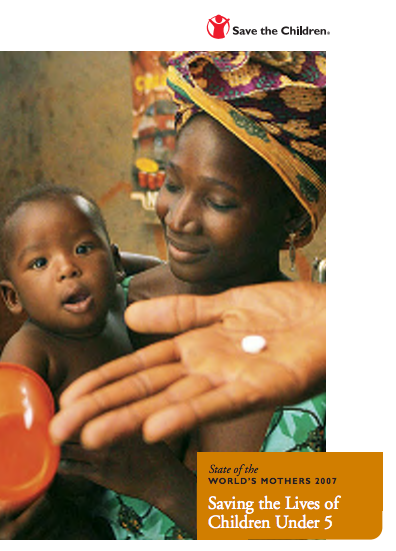 State of the World’s Mothers 2007: Saving the lives of children under 5

The report includes the first-ever Child Survival Progress Rankings of 60 developing countries, which together account for 94 percent of all child deaths worldwide. The rankings indicate which countries are succeeding and which are failing to save the lives of children under the age of 5. Twenty of the 60 countries in the Child Survival Progress Rankings have either made no progress in reducing deaths among children under age 5, or their mortality rates have increased since 1990. Iraq, Botswana, Zimbabwe and Swaziland emerge as the countries that are regressing the most. In each of these countries, under-5 mortality rates have increased in the past 15 years. In Iraq and Botswana, rates have more than doubled. The report also includes Save the Children’s eighth annual Mothers’ Index, which identifies the best and worst countries to be a mother and child-based on a comprehensive look at child and maternal well-being in 140 countries. More countries are included in this year’s Index than in any previous year. The report calls on governments to increase their political and financial support for proven solutions that save the lives of mothers, children and newborns.

State of the World’s Mothers 2007: Saving the lives of children under 5