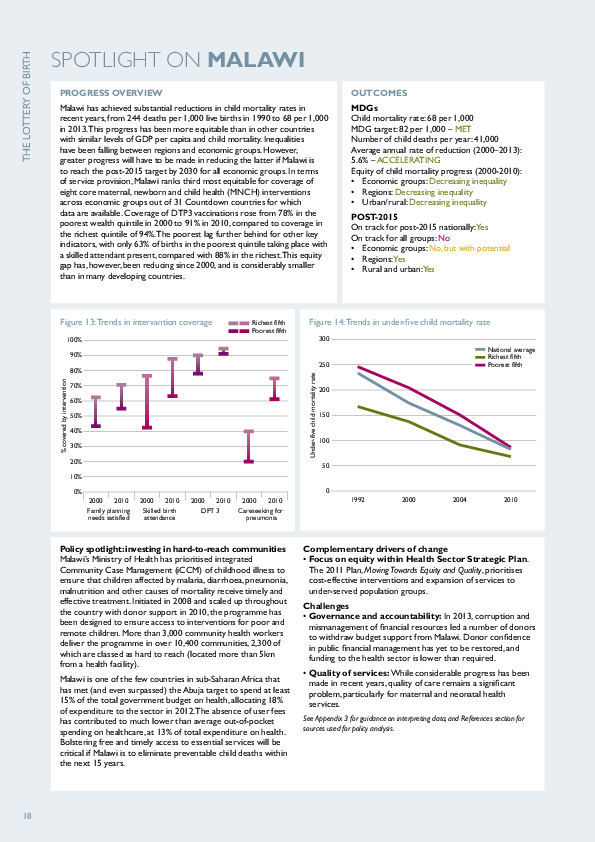 Malawi has achieved substantial reductions in child mortality rates in recent years, from 244 deaths per 1,000 live births in 1990 to 68 per 1,000 in 2013. This progress has been more equitable than in other countries with similar levels of GDP per capita and child mortality. Inequalities have been falling between regions and economic groups. However, greater progress will have to be made in reducing the latter if Malawi is to reach the post-2015 target by 2030 for all economic groups. In terms of service provision, Malawi ranks third most equitable for coverage of eight core maternal, newborn and child health (MNCH) interventions across economic groups out of 31 Countdown countries for which data are available. Coverage of DTP3 vaccinations rose from 78% in the poorest wealth quintile in 2000 to 91% in 2010, compared to coverage in the richest quintile of 94%. The poorest lag further behind for other key indicators, with only 63% of births in the poorest quintile taking place with a skilled attendant present, compared with 88% in the richest. This equity gap has, however, been reducing since 2000, and is considerably smaller than in many developing countries.

This brief describes Save the Children UK’s policy recommendations for improving the health of the children in Malawi.