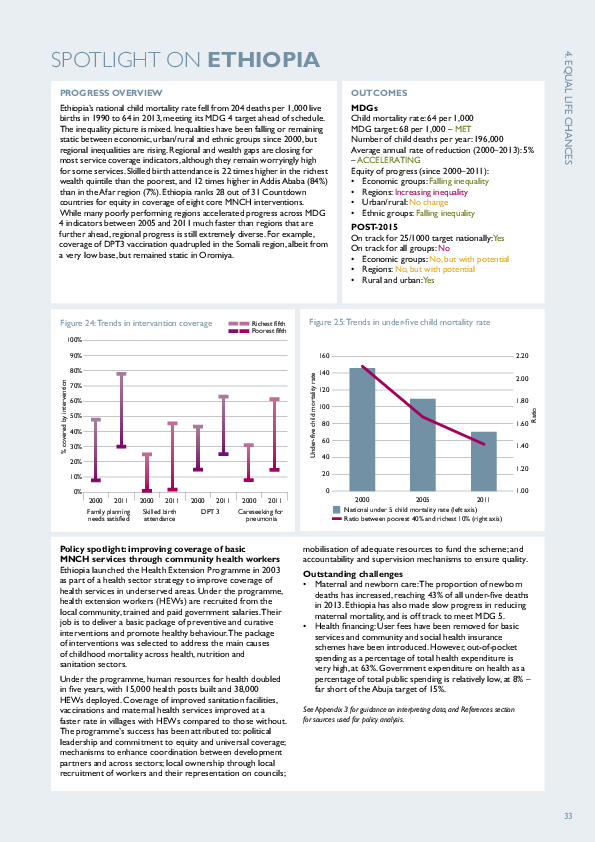 Ethiopia’s national child mortality rate fell from 204 deaths per 1,000 live births in 1990 to 64 in 2013,meeting its MDG 4 target ahead of schedule. The inequality picture is mixed. Inequalities have been falling or remaining static between economic, urban/rural and ethnic groups since 2000, but regional inequalities are rising. Regional and wealth gaps are closing for most service coverage indicators, although they remain worryingly high for some services. Skilled birth attendance is 22 times higher in the richest wealth quintile than the poorest, and 12 times higher in Addis Ababa (84%) than in the Afar region (7%). Ethiopia ranks 28 out of 31 Countdown countries for equity in coverage of eight core MNCH interventions. While many poorly performing regions accelerated progress across MDG 4 indicators between 2005 and 2011 much faster than regions that are further ahead, regional progress is still extremely diverse. For example, coverage of DPT3 vaccination quadrupled in the Somali region, albeit from a very low base, but remained static in Oromiya.

This brief describes Save the Children UK’s policy recommendations for improving the health of the children in Ethiopia.