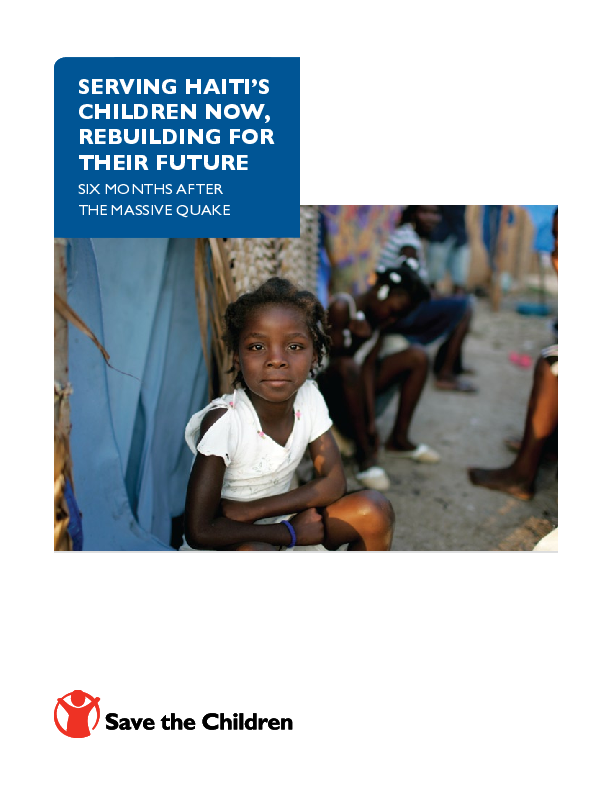 In January 2010, the impoverished Caribbean nation of Haiti was rocked by the worst earthquake to hit the region in 200 years. One of the most devastating natural disasters in living memory, in which more than 200,000 people were killed, while hundreds of thousands of children and their families were left without basic necessities like food, water, sanitation, shelter, medical care and livelihoods. Six months after the quake and despite the significant progress Save the Children and others have made to alleviate children’s suffering, the sheer scale of the destruction is such that rebuilding will take many years. The humanitarian response to the earthquake in Haiti represents the most challenging and complex emergency effort Save the Children has ever undertaken. Over the past six months, and with an outpouring of donor support second only to that Save the Children received following the 2004 South Asia tsunami, the agency has coordinated with Haitian authorities, the international community, local and international organizations and communities to reach an estimated 682,000 children and adults — with lifesaving and life-sustaining assistance. Since the early hours of January 13 families in Port-au-Prince, Léogâne, Jacmel, and surrounding areas have been provided with food, shelter, water, health and nutrition services, sanitation and livelihoods support as well as protection and educational activities for children.