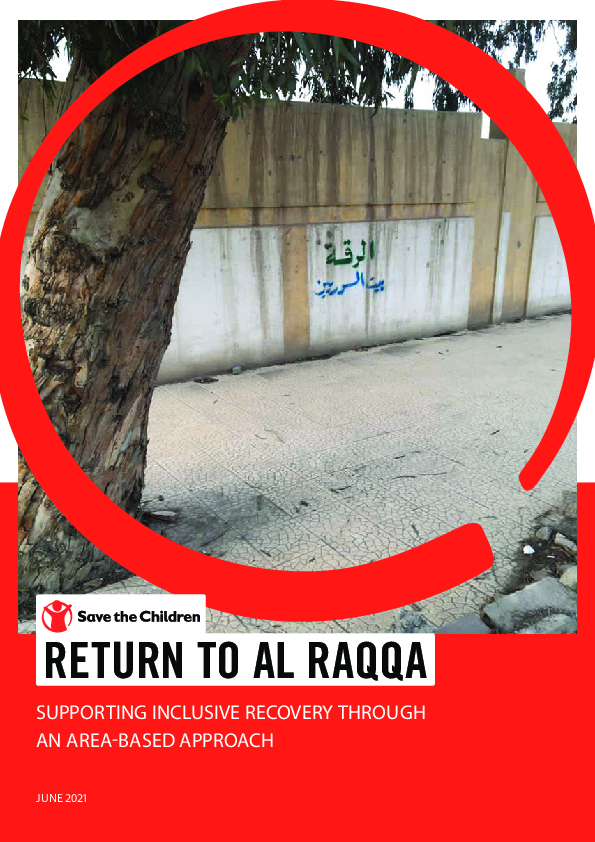 The people of Al Raqqa city in Northeast Syria experienced some of the heaviest fighting and bombing in the history of the Syrian conflict, as well as a devastating period under the control of ISIS between 2013 and late 2017. The vast majority of Al Raqqa city’s population were displaced and much of the city was destroyed. Since the defeat of ISIS in late 2017, the city has been governed by what today is called the Autonomous Administration of North-East Syria (AANES).

Through research carried out in October 2020, Save the Children aimed to better understand the population’s needs and future priorities, as well as the specific risks and opportunities facing children, adolescents, and their caregivers. The purpose of this research was to inform evidence-based programming decisions in Al-Raqqa, in particular in relation to increasing focus on sustainable recovery and building resilience.

The primary data collection methodology for this research included a survey of 426 households, with interviews conducted with one adult representative on behalf of the whole household and 391 individual-level opinion polls, with a particular focus on young people aged 16-24 years of age. The research also included 36 key informant interviews and secondary data analysis on services in the city. Four years since the battle to dislodge ISIS, this research shows, the people of Al Raqqa still face massive challenges to rebuild their lives and their city.

These challenges are often concentrated in specific neighbourhoods, where school attendance is lowest and humanitarian needs highest, social activities and governance presence is weakest and residents feel most unsafe.