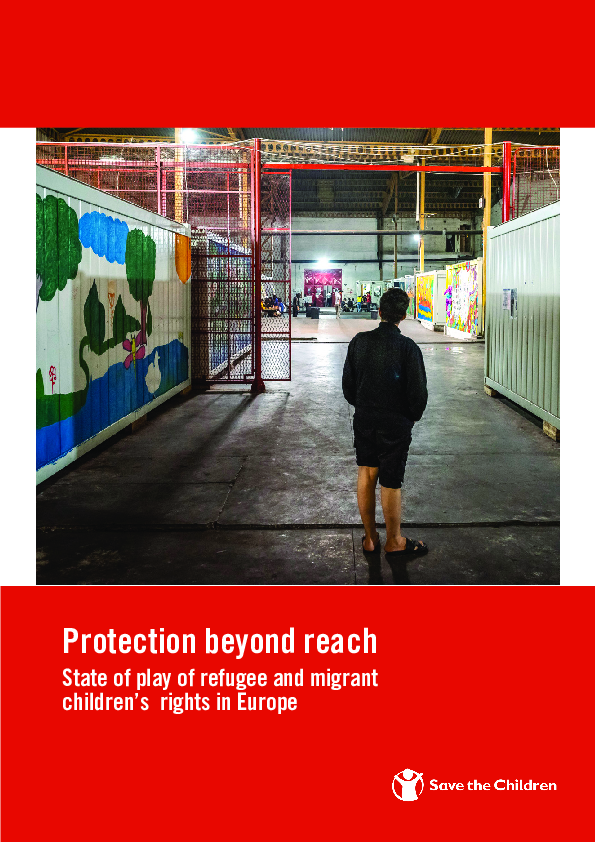 Protection Beyond Reach: State of play of refugee and migrant children’s rights in Europe

Save the Children Europe

Five years ago, on 2 September 2015, three-year-old Alan Kurdi lost his life just off the Turkish coast. Images of his dead body have become a tragic symbol of the so-called ‘refugee crisis’, when over 1 million refugees and migrants, a third of whom were chil­dren, entered Europe. His drowning was expected to inspire new measures to protect migrant and refugee children. Instead, as this report shows, five years later refugee and migrant children are often worse off. The place where they continue to be most at risk is on Europe’s external border, where Alan Kurdi tragically lost his life.

In the years that have passed since the number of asylum seekers arriving to Europe peaked, the European Union (EU) has struggled to find a com­mon response to the so-called ‘refugee crisis’. New policies have been proposed, but very few have come to fruition. The EU-Turkey deal, agreed in March 2016, led to a significant reduction in the number of refugees and migrants arriving in Europe, but tens of thousands of people – including thousands of children – remain stranded on the Greek islands in inhumane conditions. At the same time, arrivals by sea from northern Africa have continued, and children continue to drown on the EU’s watch. The sharp increase in anti-migrant sentiments and radical right-wing populism has had a profound effect on laws and policies, leading to measures of control and security that disproportionally affect children, whether they are travelling alone or with their families. At the same time, the situation in countries of origin, where Save the Children also works, continues to be precarious. As the conflict in Syria enters its tenth year, half of the country’s 8 million children have known only war. The conflict in Afghanistan – where most unaccompanied children in Europe come from – remains one of the most dangerous for children, who comprise 31% of total casualties.

With this report, Save the Children aims to assess how children have been affected since the beginning of the so-called ‘refugee crisis’. We look at five key themes: protection at Europe’s outer borders; immigration detention; access to asylum and residency; family reunification; and guardianship. The report aims to highlight key changes that affect children, rather than provide a comprehensive overview.

We start with an overall assessment of the situation in Europe and then focus on specific measures in countries at Europe’s outer borders, such as Serbia, Bosnia and Herzegovina and Tunisia, and various European countries such as Spain, Italy, Sweden, Finland, Norway and Greece.

Protection Beyond Reach: State of play of refugee and migrant children’s rights in Europe

Save the Children Europe