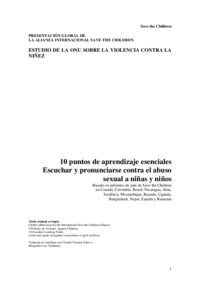 Save the Children contributed to the United Nation Secretary General´ s Study on Violence against Children by participating in organising the UN consultations in the regions, preparing thematic reports at country, regional and international level and in follow-up actions. Children´s meaningful and ethical participation was an overarching priority for Save the Children´s involvement in the UN Study and so was gender equality. This report is one of three global thematic submissions to the UN Study; the other two focus on Physical and Humiliating Punishment and Children in Conflict with the Law.