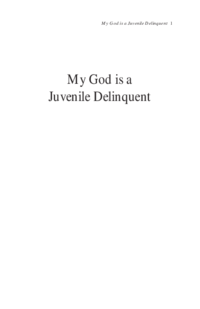 My god is a juvenile delinquent

In My God Is A Juvenile Delinquent, Ruzbeh N. Bharucha enters the lives of young offenders who have been imprisoned and tells their stories. Most of the ‘juvenile delinquents’ come from poor and destitute families who live in the toughest of circumstances. These children and their families are ignorant about the laws that are there to protect them as well as the ones they are accused of breaking. The life stories of young boys, whose families do not have the resources to hire lawyers, are poignant and illustrate both the acute social inequity in India and the inadequacy of the law to protect the most vulnerable. Despite the Juvenile Justice Act (JJ Act) providing for the establishment of Special Juvenile Police Units (SJPUs) at the district level and designation of a Child Welfare Officer (CWO) from the police force in every police station to deal with children in conflict with law, the situation remains grim. In many states the SJPUs and the CWOs are not fully established.

My god is a juvenile delinquent