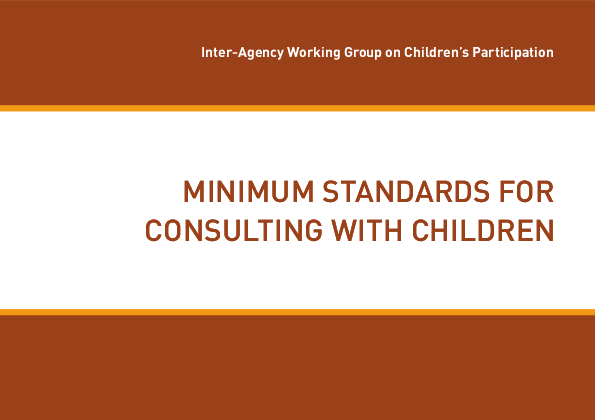 Minimum standards for consulting with children

‘The Minimum Standards for Consulting with Children’ is a tool developed in an effort to support formal consultations with children. They were developed by a multi-agency group in East Asia and the Pacific, through six years of practice, as part of a process to ensure meaningful and high-quality children’s participation in the UN Study on Violence against Children, the East Asia and Pacific Regional Consultation and associated meetings. Thus, many individuals, especially children and technical experts, as well as national and international non-governmental organisations and inter-governmental organisations have contributed to, provided invaluable advice on, and otherwise influenced the final text. This is a major contribution to global efforts to increase the quality and effectiveness of children’s participation, based on systematic experiences in preparing children for meetings, facilitating representative selection of children, ways of involving them in adult discussions, modes of facilitating their contributions and including these in outcome documents.

Minimum standards for consulting with children