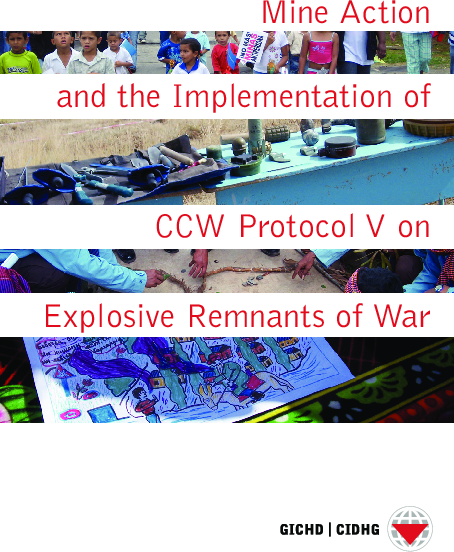 Explosive remnants of war – consisting of abandoned explosive ordnance and unexploded ordnance as a result of armed conflicts – pose significant threats to the survival and development of civilian populations. All too frequently they kill and injure the most vulnerable members of society and impede the reconstruction of a war-torn country or region. In response, States adopted a landmark agreement in 2003 – Protocol V on Explosive Remnants of War to the UN Convention on Certain Conventional Weapons – which provides an international legal basis for reducing the risks from these explosive devices for the first time.

The Protocol’s entry into force on 12 November 2006 provided a welcome opportunity for further strengthening international efforts to tackle the consequences of ERW. But the mobilisation of political will in adopting a treaty must be swiftly followed by effective action by all concerned with implementing it. Mine Action and the Implementation of CCW Protocol V on Explosive Remnants of War provides practical information to those engaged in Mine Action – activities which aim to reduce the social, economic and environmental impact of mines and ERW.

The publication is intended particularly for States and their armed forces, but also for international and non-governmental organisations involved in explosive ordnance disposal, risk education or assistance to the victims.