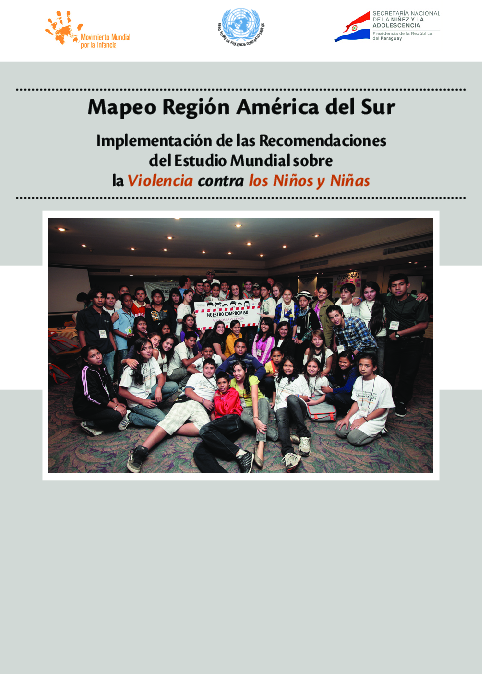 This report, which maps the implementation of the recommendations of the landmark 2006 U.N. Study on Violence against Children in South America, was presented at a two-day international meeting held in the Paraguayan capital city of Asunción on 28-29 April 2011. The two-day event gathered high level representatives from a number of countries in the region, NGOs, international experts and children who were able to exchange their experiences and voice their needs directly to child rights organisations and decision-makers.
The countries in the region are working slowly to overcome barriers in the fight against the violence suffered by children and adolescents in their homes, schools, workplaces or juvenile detention centres. Abandonment, exploitation and corporal punishment are some of the ills that remain part of the day-to-day reality of too many children and teenagers throughout the region.
In Latin America, around 28,7% of all homicide victims are children and adolescents between 10 and 19 years old; six million children in the region suffer serious physical abuse; and 80,000 die every year as a result of abuse at the hands of their parents.The highest homicide rates of any group across the population occur among 15-19 year olds. Studies also show that between 70-80% of the children victims of sexual abuse are girls, and that in 75% of the cases they have a direct relationship with the victim. In addition, marriage before 18 years of age is still a common practice, especially among adolescent from indigenous and rural populations. It is estimated that around 29% of Latin American and Caribbean women aged 15- 24 were married before the age of 18 and that more than 2 million children and adolescents are exploited sexually each year.
The mapping is part of the initiatives that seek to open avenues for strengthened collaboration with governments in the region and to help mobilize support for the adoption of a legal ban on all forms of violence against children.