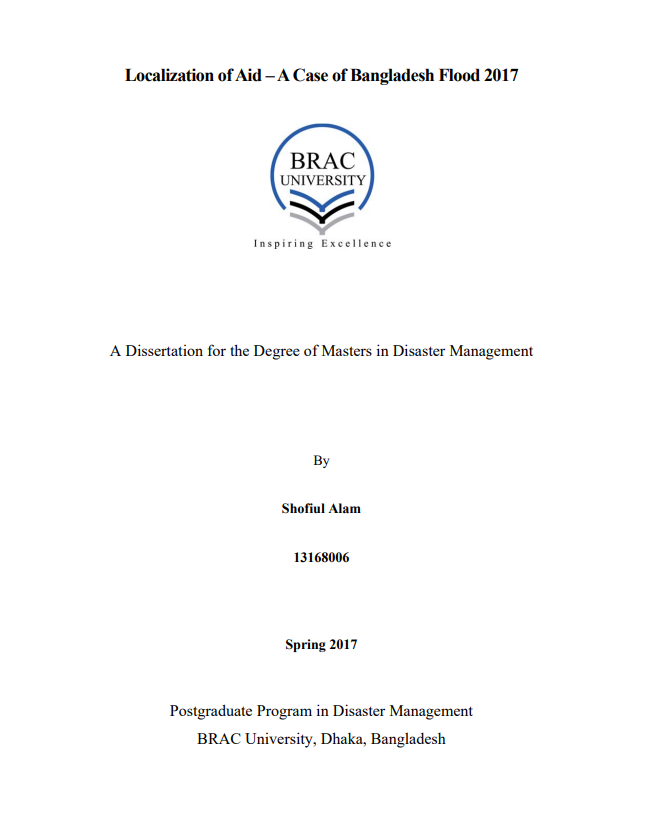 Localization of Aid: A case of Bangladesh flood 2017

Today, only a small fraction of funding is given directly to local actors. An estimate from UN OCHA FTS dataset indicates local and national responders received only 2% of the humanitarian funding globally. Local and national NGOs combined are the critical actors in shifting the centre of gravity for humanitarian action. In this view, this study aims to know about the types of partnership, best practices, and shortfalls in terms of coordination among local/national NGOs and INGOs within the framework of localization. Bangladesh is one of the most vulnerable countries to natural disasters as floods and cyclones and has experienced a great proliferation of civil society organizations widely known as NGOs since its independence. Recently it has been also introduced to Start Fund, which is notable among the limited global and national pooled fund led by NGOs for small/medium disasters for its immense speed with a keen interest on localization. But as funding cannot be a sole measure of progress on localisation and other aspects are also critical, including increasing the quality of funding, building partnerships that are more equitable, and strengthening national capacities, the study has adopted a seven dimension framework based on existing literature. The study adopted a mixed data collection technique and information was gathered by administering a semi-structured questionnaire among the Start Funded agencies (INGOs and N/LNGOs). This study provided an opportunity to better understand how the Start Fund members operate in this setting, and how current practices, which are, partially but not only, shaped by Start Fund policies and procedures, related to “localisation”. It was found that, though N/LNGOs account for the major portion of the programmatic cost, they are unable to access sufficient management or operational costs. This is because there is little awareness about who is funding the Start Fund and how the Start Fund functions. The local staff of INGOs also confirmed that during the response because of the short time frame both local staff of INGOs and partners are overstretched. This as a result impacts the quality of partnership by causing a lack of information sharing, collaboration, etc. It can be recommended that appropriate funds should be allocated for staff salaries in the budget so it does not lead to brain drain during Start Funded response. There is also a need to safeguard a window of funding for NNGOs, as they will not always be able to compete for funding on the same terms as INGOs, in formats, with a jargon and a mindset that over decades have been honed by the latter. The inclusive approach to set up the new fund (i.e. Start Fund Bangladesh) will be crucial if it is to have national ownership, with a percentage of its budget going to national actors by 2020, and a major reduction in intermediation.

Localization of Aid: A case of Bangladesh flood 2017