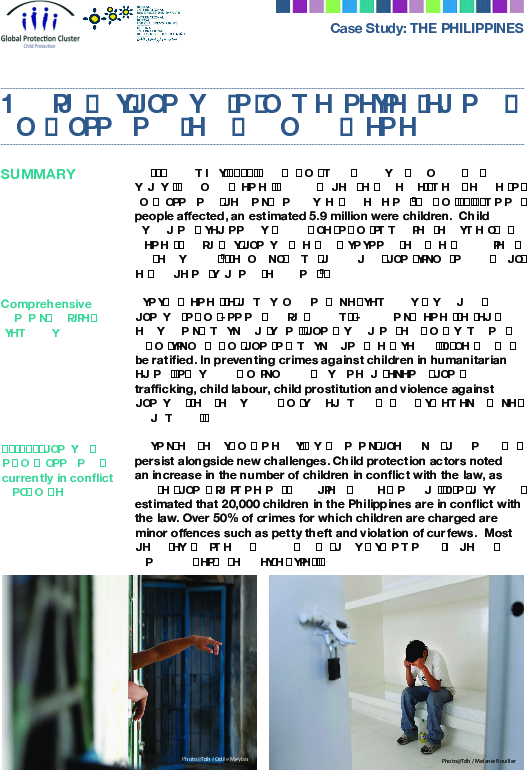 Justice for Children in Humanitarian Action: The Philippines and Typhoon Haiyan

On 8 November 2013, one of the most powerful typhoons on record, Typhoon Haiyan (known locally as Yolanda) made landfall in the Philippines causing widespread devastation. Of the 14.1 million people affected, an estimated 5.9 million were children. Child protection practitioners noted that in the immediate aftermath of Haiyan, justice for children was not prioritised and was essentially not addressed, although some connected child rights issues such as education received attention.

Typhoon Haiyan highlighted the urgent need for better preparedness around child protection in general and justice for children in particular in the Philippines. Anecdotal evidence suggests that there has been an increase in the number of children in contact with the law as a consequence of the emergency. However no formal study exists to ascertain the extent of change. Currently there is no disaggregated data (by sex and age) to allow a targeted response to the needs of girls and boys in different age groups.

The draft act addressing emergency relief and protection of children in disaster and other emergency situations seems to be a lesson that has been learned from recent disasters and will be an important step to address the situation of children in contact with the law after emergencies once in force and put into practice. This case study discusses these issues.

Justice for Children in Humanitarian Action: The Philippines and Typhoon Haiyan