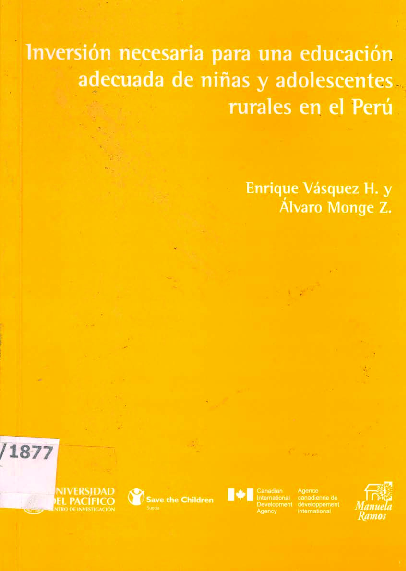 The report “Investment required for an adequate education for girls and rural adolescents in Peru“, written by Enrique Vásquez and Alvaro Monge, holds that women will be less likely than men to have access to the labour market in Peru due to women’s usually lower educational levels and skills. It is estimated that around 74% of girls 14 years or older (almost one and a half million), make it as far as primary school or less. While opportunities for schooling  have expanded, girls of all ages and young women from rural areas are the weakest link in the learning chain. Due to the numerous barriers standing in the way of education for girls in many of Peru’s impoverished rural regions,  girls tend not to complete secondary education, and to drop out of school. Statistics show that nearly 750.000 women in Peru never started formal education because parents, when faced with scarce resources, chose to educate boys rather than girls.  The report also notes that although the Peruvian Congress approved the Law 27558 for “the promotion of rural girls’ and female teenagers’ education” in 2001, the law has hardly been put into practice. The issue of poverty further aggravates the situation of girls’ lack of access to education in rural areas, because girls are needed to help with domestic work or productive work, which is discriminatory against, and in violation of, the rights of the girl-child. Education is central to reverse these stereotypes, trends and practices, which constitute discrimination against women and their right to education.

According to the report, another worrisome aspect is the health status of adolescents in rural areas. Around 50% of adolescents in these areas are not covered by an integral health insurance, contributing to increased risk for of unintended pregnancies, sexual violence and sexually transmitted diseases.