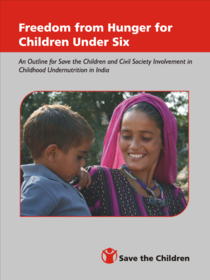 Freedom from Hunger for Children Under-Six. An outline for Save the Children and Civil Society Involvement in Childhood Undernutrition in India

India’s burgeoning economy has not been kind to the majority of its children.The disparities between rich and poor can be observed in the shocking hunger and malnutrition rates for large numbers of India’s children. Even after decades of effort and good intentions from the government, child malnutrition rates in several parts of India are worse than in many sub-Saharan African countries, and they stand out as a paradox in the country.The stark reality is that almost one in every three babies in the world who die before they are four weeks old is from India. Save the Children argues that the problem of malnutrition and infant and maternal mortality can be solved if it is addressed at the grassroots level in villages and districts.To make this a reality, however, there must be greater collaboration, consultation and joint action planning among key stakeholders, namely, the Ministries of Health and Ministry of Women and Child Development working together with the community. This report reinforces the urgency of the situation for millions of children in India, and the urgency of tackling hunger and malnutrition on an emergency footing if we are to meet our promises to India’s children.

Freedom from Hunger for Children Under-Six. An outline for Save the Children and Civil Society Involvement in Childhood Undernutrition in India