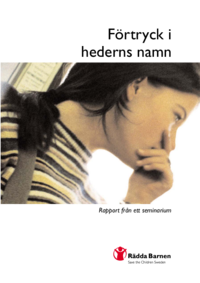 After the murder of Fadime Sahindal, a young Kurdish woman living in Sweden who became the victim of an honour killing by her father, more attention has been focused on girls living in conflict due to the fundamentalist backgrounds of their families. The case prompted intense media attention, and politicians, Non-governmental organisations and experts tried to bring a new set of responses to the complexity of issues surrounding “honour killings”. This report is a revised version of a workshop held in 2003, attended by 40 participants who have had direct contact with immigrant girls suffering from honour-related repression.