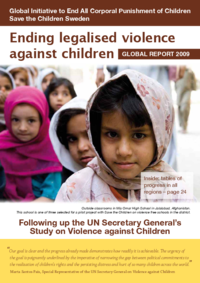 Global Initiative to End All Corporal Punishment of Children,Save the Children Sweden

In total, 109 states have prohibited corporal punishment in all schools, 150 as a sentence of the courts, 109 as a disciplinary measure in penal institutions and 36 in all alternative care settings (residential and day care institutions, foster care, etc). The rate of law reform has increased dramatically in recent years, particularly in the context of the UN Study on Violence against Children. In the ten years since Sweden first achieved prohibition in 1979, three more states did the same; four more states achieved law reform in the following decade. In the decade 1999 to 2009, 17 states enacted laws to give children equal protection from assault. But still, only 3.2% of the global child population are legally protected from being hit by parents and other carers in the family home. Only 4.6% live in countries where they would be protected in all forms of alternative care. If the governments committed to prohibition achieve law reform, and if prohibiting draft legislation currently under discussion is passed, still less than a fifth of the global child population would be fully protected in law. Over 150 state governments have made no commitment to prohibiting corporal punishment in the home, despite the vast majority being urged to do so, sometimes repeatedly, by the Committee on the Rights of the Child. Corporal punishment is lawful in schools in almost 90 states. Some governments openly defend the use and legality of corporal punishment in the home, schools and other settings.

Global Initiative to End All Corporal Punishment of Children, Save the Children Sweden