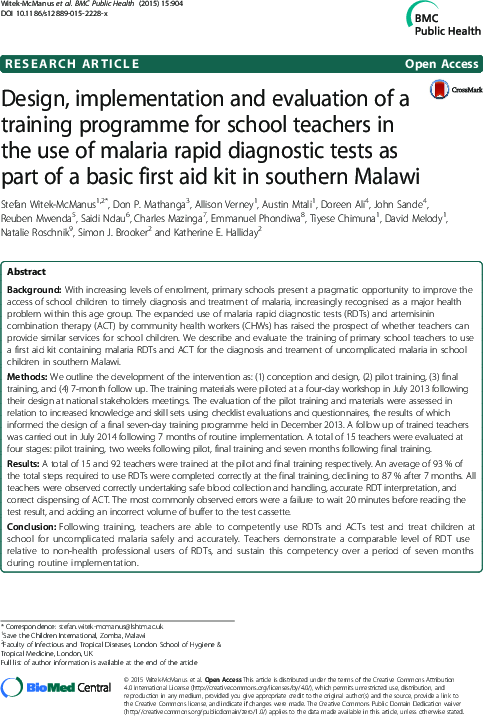 Design, Implementation and Evaluation of a Training Programme for School Teachers in the Use of Malaria Rapid Diagnostic Tests as part of a Basic First Aid Kit in Southern Malawi

Background: With increasing levels of enrolment, primary schools present a pragmatic opportunity to improve the access of school children to timely diagnosis and treatment of malaria, increasingly recognised as a major health problem within this age group. The expanded use of malaria rapid diagnostic tests (RDTs) and artemisinin combination therapy (ACT) by community health workers (CHWs) has raised the prospect of whether teachers can provide similar services for school children. We describe and evaluate the training of primary school teachers to use a first aid kit containing malaria RDTs and ACT for the diagnosis and treament of uncomplicated malaria in school children in southern Malawi. Methods: We outline the development of the intervention as: (1) conception and design, (2) pilot training, (3) final training, and (4) 7-month follow up. The training materials were piloted at a four-day workshop in July 2013 following their design at national stakeholders meetings. The evaluation of the pilot training and materials were assessed in relation to increased knowledge and skill sets using checklist evaluations and questionnaires, the results of which informed the design of a final seven-day training programme held in December 2013. A follow up of trained teachers was carried out in July 2014 following 7 months of routine implementation. A total of 15 teachers were evaluated at four stages: pilot training, two weeks following pilot, final training and seven months following final training. Results: A total of 15 and 92 teachers were trained at the pilot and final training respectively. An average of 93 % of the total steps required to use RDTs were completed correctly at the final training, declining to 87 % after 7 months. All teachers were observed correctly undertaking safe blood collection and handling, accurate RDT interpretation, and correct dispensing of ACT. The most commonly observed errors were a failure to wait 20 minutes before reading the test result, and adding an incorrect volume of buffer to the test cassette. Conclusion: Following training, teachers are able to competently use RDTs and ACTs test and treat children at school for uncomplicated malaria safely and accurately. Teachers demonstrate a comparable level of RDT use relative to non-health professional users of RDTs, and sustain this competency over a period of seven months during routine implementation.

Design, Implementation and Evaluation of a Training Programme for School Teachers in the Use of Malaria Rapid Diagnostic Tests