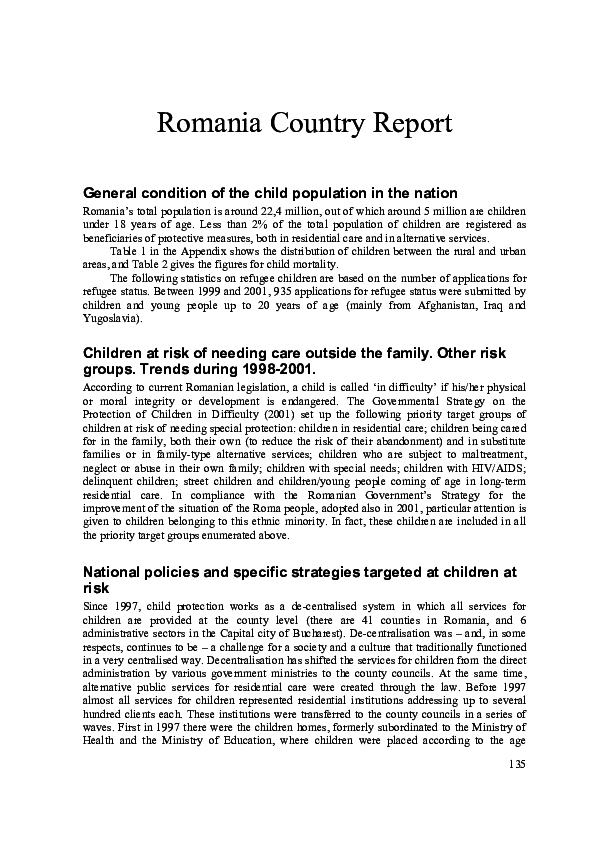 Country report of Romania on the situation of children in residential care in anticipation of the Second International Conference on Children and Residential Care: New Strategies for a New Millennium, to be held in Stockholm 12 – 15 May 2003. The Romanian system of services for children in difficult circumstances is undergoing a thorough reform. The reform started in 1997 with de-centralisation and initial regulations on alternative service to the residential institutions. Thus, the number of children in institutions has decreased, particularly after 2001. From an almost 100% residential-type oriented system in 1997, the end of 2002 found more than half of the beneficiary children registered in alternative services. Simultaneously, the remaining institutions underwent major change in order to bring this type of protection closer to the family environment. The institutions started to open up towards the community; they became smaller; and the children in these institutions became more actively involved in all the housing-type activities that are going on in these institutions. Institutions for children with medium and severe disabilities are a special case, and the reform of these institutions is currently among the main priorities of the Romanian government.