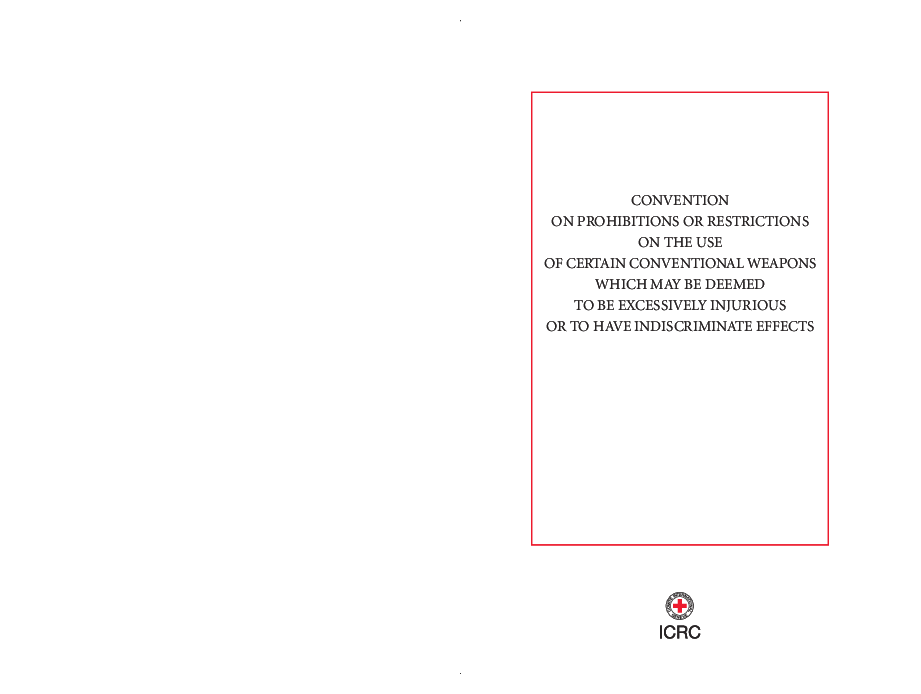 Convention on Prohibitions or Restrictions on the Use of Certain Conventional Weapons Which May be Deemed to be Excessively Injurious or to Have Indiscriminate Effects: With amendments and protocols adopted through 28 November 2003

Along with the Geneva Conventions of 1949 and their Additional Protocols of 1977, the Convention on Prohibitions or Restrictions on the Use of Certain Conventional Weapons Which May be Deemed to be Excessively Injurious or to Have Indiscriminate Effects is one of the principal instruments of international humanitarian law. It was adopted in 1980 and entered into force in 1983.This publication contains the current text of the Convention and its five Protocols as adopted through 28 November 2003 and is intended to promote understanding of the instrument’s rules and to facilitate its ratification and implementation by governments.

Negotiated under the auspices of the United Nations in 1979 and 1980, the Convention on Certain Conventional Weapons builds upon long-established customary rules regulating the conduct of hostilities. These include: (1) the requirement that a distinction be made at all times between civilians and combatants; and (2) the prohibition of the use of weapons which inflict excessive injury or suffering on combatants or render their death inevitable. While these general principles apply to all weapons used in armed conflict, the Convention imposes specific prohibitions or restrictions on the use of conventional weapons about which there is widespread concern.