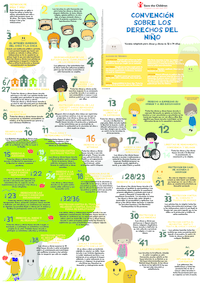 All children have the same rights. These rights are listed in the UN Convention on the Rights of the Child adopted by the United Nations General Assembly in 1989 and subsequently signed by almost every country in the world. The four child-friendly versions of the Convention that have been issued are adapted to accommodate different age groups of children. This is an adapted version written for children between the ages of 12-14.

Child protectionChildren's rightsUN Convention on the Rights of the Child