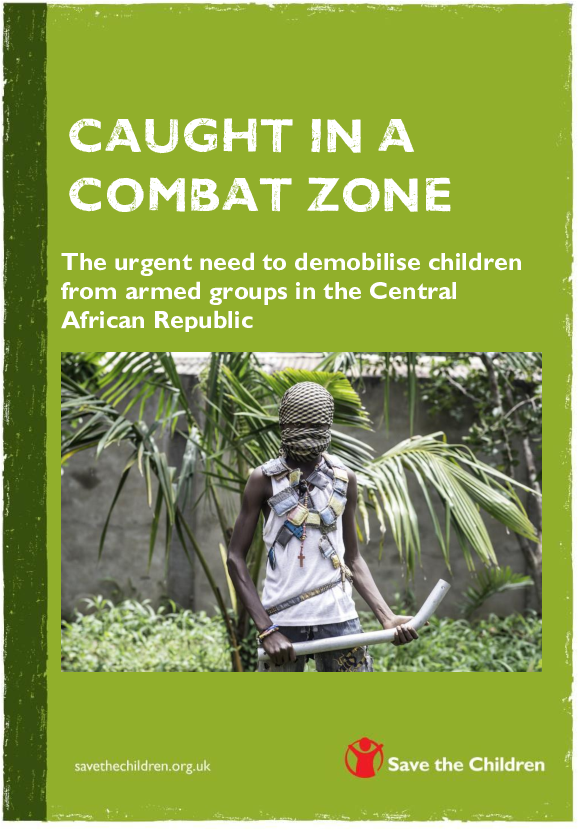 Caught in a Combat Zone: The urgent need to demobilise children from armed groups in the Central African Republic

The Central African Republic (CAR) has been experiencing a deepening crisis since renewed armed conflict broke out in December 2012, following the seizure of power by Muslim-dominated Séléka armed groups and the subsequent emergence of so-called “anti-balaka” militias. Both Séléka and anti-balaka forces are responsible for grave human rights violations against civilians.

Countless children have suffered appallingly, and continue to suffer from the violence, which is ongoing despite a ceasefire agreement between the two factions in July 2014. Children are among thousands of people who have been killed or subjected to rape or other forms of sexual violence, and they make up a significant proportion of the hundreds of thousands of people who have been forcibly displaced. In addition, it is estimated that as many as 10,000 boys and girls under the age of 18 years have been recruited by armed groups for use in roles such as combatants, porters and spies, and for sexual purposes.

Save the Children calls on UNICEF and other relevant UN agencies, partners, and the CAR government to make children the priority. Greater priority and additional resources are needed to accelerate efforts to identify and release children associated with armed groups and to ensure their reintegration.

Caught in a Combat Zone: The urgent need to demobilise children from armed groups in the Central African Republic