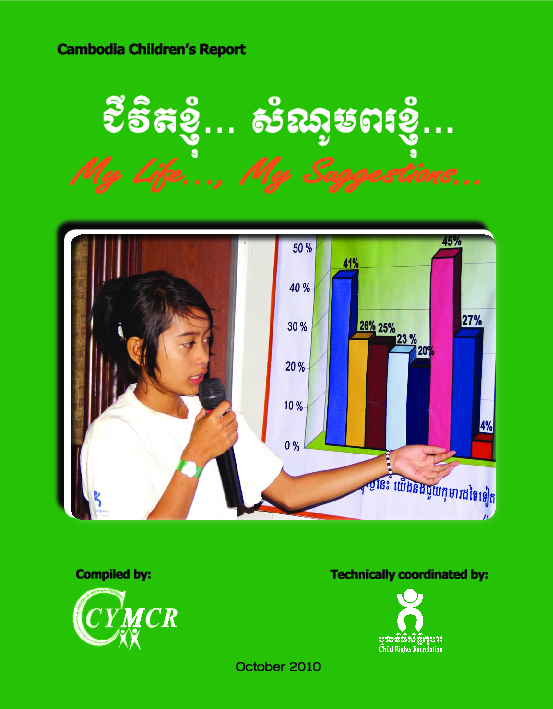 The report “My Life My Suggestion” is released by Cambodian Children and Young People’s Movement for Child Rights, a network of children and youth from 20 organisations operating in 16 provinces that is supported by Save the Children. The report highlights the dire situation that Cambodia’s children face in their daily lives and provides a number of important recommendations to engage the Royal Government in solving the problems that affect the living situation and development of children. Statistics reveal that twenty-six percent of the children surveyed said they have never received care and warmth from their parents and a quarter said they were forced to do various dangerous or unsuitable jobs, including pulling carts, performing wage labour, begging, working in rubber plantations, working at construction sites and factories, scavenging for scraps, logging and finding firewood. Also documented is the limited extent of the country’s child healthcare services, as twenty-three percent of the survey participants stated that hospitals were far from their homes, and that health centres were small, understaffed and under-equipped. Moreover, twenty-seven percent of the children said they faced regular discrimination on the basis of poverty and race, and for having disabilities or suffering from HIV/AIDS. The report was sent to UN Committee on the Rights of the Child in 2010 and it is hoped that the Committee will push the government to introduce measures and practical actions to ensure that Cambodian children truly become holders of all rights enshrined in the Convention.