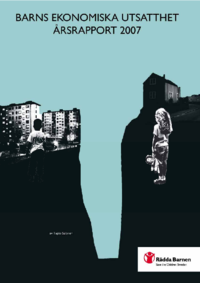 This report is the fifth annual update of the study “Barns ekonomiska utsatthet under 1990-talet. Bidrag till ett kommunalt barnindex” (The economic vulnerability among children in Sweden during the 1990s. Contribution to a national child welfare index), which examined trends in child poverty in Sweden during the 1990s. Four annual reports on this subject have been published covering the years 2000, 2001, 2002 and 2004. An in-depth analysis of the economic vulnerability of children of single vs two-parent families covering the year 2003 was published in 2006. The present report reflects the developments of the economic situation and wellbeing of children in the years prior to 2005, and describes a set of changes that have occurred both at national and regional levels during the last year.