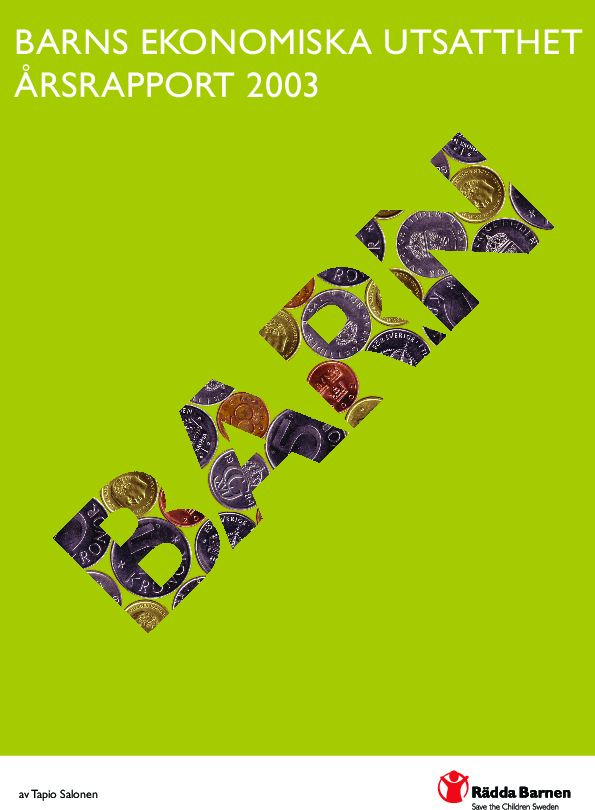 This is the second annual update to the study carried out by Professor Tapio Salonen at the request of Save the Children Sweden – ‘Barns ekonomiska utsatthet under 1990-talet: Bidrag till ett kommunalt barnindex (Economic vulnerability of children in Sweden during the 1990s. Contribution to a national child welfare index), which examined child poverty trends in Sweden throughout the decade of the 1990s. The main objective of this report is to show how children’s financial conditions have changed between 2000 and 2001. This report also analyses the economic development and child well-being in the suburbs of big cities in Sweden over the period 1991– 2001.
Child poverty is defined on an index combining two factors – low levels of relative income or living with income support (a guaranteed minimum level established by the Swedish Parliament in 1998). Save the Children Sweden has worked to raise awareness of child poverty in Sweden since releasing its first report in 2002 calling for a national action plan to address the issue and combat the growing incidence of child poverty. The studies on child poverty are a first step towards a child index, which would annually reflect changes in various aspects of children’s welfare at the municipal level.