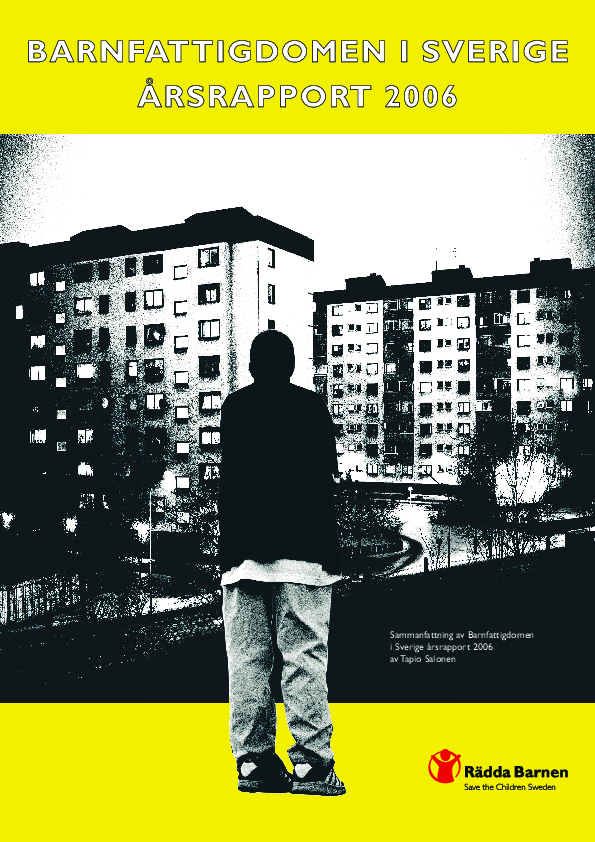 A summary of the fourth annual update of the series “Barns ekonomiska utsatthet under 1990-talet. Bidrag till ett kommunalt barnindex” (The economic vulnerability among children in Sweden during the 1990s. Contribution to a national child welfare index) written by Tapio Salonen. The findings in this year’s report, which builds on statistics from 2004, sees an increase in the number of children in poor households – up from 12,8 per cent to 13 per cent between 2003 and 2004. Differences between high- and low-income families with children have widened – higher income families saw their household economy improve while poorer households tended to lag behind. The most exposed children are the ones who live with a foreign single parent. Every other child (50,3 procent) from a foreign single parent household lives below the poverty line used in the study, compared to children reared in Swedish two-parent families (3,5%). 23 per cent of the children living in Swedish lone-parent households fall below the line classified as relative poverty. More than 40% of all children reported to live in economic poverty are from suburbs surrounding Sweden’s largest cities – Stockholm, Malmö and Gothenburg.
Child poverty is defined on an index combining two factors – low levels of relative income or living with income support (a guaranteed minimum level established by the Swedish Parliament in 1998). Save the Children Sweden has worked to raise awareness of child poverty in Sweden since releasing its first report in 2002 calling for a national action plan to address the issue and combat the growing incidence of child poverty. The studies on child poverty are a first step towards a child index, which would annually reflect changes in various aspects of children’s welfare at the municipal level