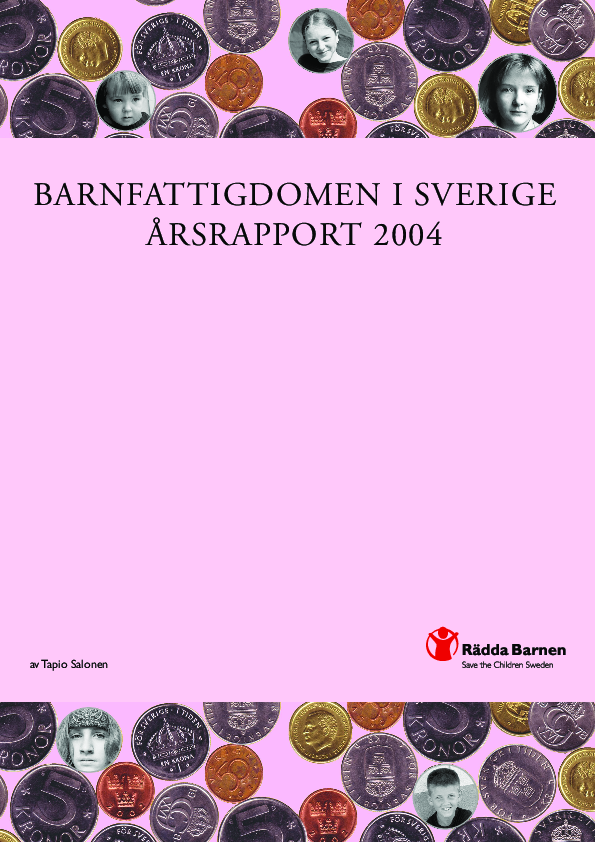 This report is the third annual follow-up report of the study “Barns ekonomiska utsatthet under 1990-talet. Bidrag till ett kommunalt barnindex” (The economic vulnerability among children in Sweden during the 1990s. Contribution to a national child welfare index), which examined children’s economic well-being in Sweden during the decade of the 1990s leading up to 1999. This report, built on statistics from 2002, reviews previous annual reports in order to illustrate changes in child poverty rates over time. The main objective of this report is to reflect the changes in children’s economic well-being over the past year (2001-2002). The report also includes interviews carried out with children and adults on how economic vulnerability affects families with children.

Child poverty is defined on an index combining two factors – low levels of relative income or living with income support (a guaranteed minimum level established by the Swedish Parliament in 1998). Save the Children Sweden has worked to raise awareness of child poverty in Sweden since releasing its first report in 2002 calling for a national action plan to address the issue and combat the growing incidence of child poverty. The studies on child poverty are a first step towards a child index, which would annually reflect changes in various aspects of children’s welfare at the municipal level.